Giving a voice to researchers in Burundi & the surrounding region 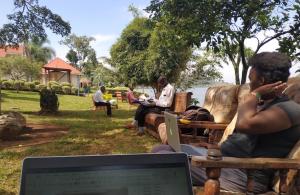 There is renewed interest in the need to ‘decolonise’ research, but how does this work out in practice? We follow the experience of the Idjwi Blog Series.

The ‘decolonial’ debate is not new to academia, but with the contemporary focus on issues of privilege and oppression – as exemplified by the Black Lives Matter movement – it has become a hot topic.

The drive to ‘decolonise’ research rests on the premise that, too often, those considered to be the key authorities on knowledge about the Global South are, white, male, academics from North America and Europe.

The retreat took place in November 2019 on the island of Idjwi in Lake Kivu, Democratic Republic of Congo, with 22 academics from Burundi, DRC Congo, Rwanda and Uganda.

Many had earlier taken part in the annual conference of the Burundi Research Network (BRN) in Nairobi in July 2019, also funded by the OU, IFRA-Nairobi (France), UCL/IACCHOS) (Belgium) and ARES (Belgium).

The retreat was envisaged as a space where the scholars could produce short articles about research topics of their own choice, free from constraints commonly imposed by limited funding, the topic preferences of funding bodies – often foreign agencies – and sudden changes of political and security contexts.

They worked on short articles on subjects ranging from research methodology and regional politics to night motor taxis, football politics and the debates surrounding the Burundian drum.

These are now being published as the Idjwi Blog Series on the LSE website and the OU’s Innovation and International Development research website.

The only academics on the retreat not producing blogs were the organisers Dr Astrid Jamar, Lecturer in Development at the OU’s Development Policy and Practice (DPP), and Dr Patrycja Stys, from CPAID.

The experience of organising the Nairobi-based conference and the writing retreat demonstrates there are substantial theoretical and practical hurdles to be overcome on the road to decolonisation, Dr Jamar said.

“Because Burundi has had five decades of violence and complicated peace processes it gets used a case study by academics working on violence generally, so a lot of Global North academics write about Burundi, but not many do fieldwork in Burundi,” she said.

“During the retreat and following peer-review process it became clear that the theoretical framework and vocabulary that we have been using does not always represent the experiences and views of Burundian people and scholars – as is made explicit in the Idjwi blog about regional migration.

“Or in the blog about ‘protests’, this word has been translated from the French ‘manifestations’, but neither the French nor the English fully captures the concept the author is describing.

“What is great is that things like this are sparking new conversations with new theoretical angles.”

Theory aside, the logistical and bureaucratic challenges of organising the conference and the writing retreat were ‘enormous’, she said.

Just fixing the location of the retreat, for example, was fraught with problems – Burundi itself, and neighbouring Rwanda, were ruled out for political reasons, and nearby Uganda was too complicated to travel to from Burundi, so the location of Idwji Island was chosen despite some logistical complications.

Not impossible but 'asymmetric'

And the complications of getting all the academics in the right place at the right time were such that during the process the organisers had to ask for extra funding, which was given.

‘The support from the OU, the SRA and the LSE was fantastic,’ Dr Jamar said.

And the successful publication of the blog series shows that ‘things can be different’.

“It has been extremely time-consuming, and challenging, but it is not impossible to get moving in a different direction.”

She warned, however, that the forces working against decolonisation are formidable.

“We must not underestimate challenges and limitations. The power dynamics remain asymmetric. The fact is that we in Europe are the ones with the budget lines.”