No easy roads to development in Nepal 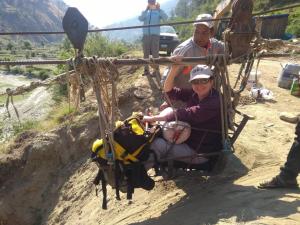 Kirsteen Merrilees is an engineer building roads in a remote region of one of the world’s most mountainous countries. She combines her challenging job with studying for an Open University PhD in Development Policy and Practice.

When Kirsteen completed the high-altitude Everest marathon last November, she called it ‘the toughest thing I’ve ever done’, but Kirsteen is no stranger to challenges in her day job.

Kirsteen is an engineer project-managing the teams building and maintaining roads in Nepal’s far west Karnali province, one of the country’s poorest and most isolated regions.

“This part of Nepal is closer to China than to Kathmandu, and its people feel neglected. When I first flew into the area it took me seven days to walk to the road head.

“We are giving people links to health systems and education, and not just local ones – they now have a choice of hospitals and schools.”

While the economic benefits of the roads may not be great, the social impacts of employing local people in their construction are strong, she says.

“Our project is pro-poor: we work with the poorest people in the community, women are paid the same as men, and we do not distinguish between caste, we have Dalits working alongside other castes.

“Because people are working in groups, social cohesion is stronger and more egalitarian than in other communities, there is less discrimination against women and Dalits.

“Nepal has a new local government system with elected local officials, and the hope is that those who have worked together will be better able to put pressure on these officials do their job well.”

When she first worked on RAP in 1999, Kirsteen faced the challenge of being the first woman engineer on the project, but ‘things have change a lot’, she says, and she now works with a number of women graduate engineers.

The working environment is tough, but the dedication and commitment of her  team more than make up for it, she says. “The people here make it one of the easier places I have worked in.”

The logistics of construction in such difficult and remote terrain are a nightmare – Kirsteen’s current construction site is reached by a river with no bridge, forcing people and equipment to cross by ropeway for most of the year.

Thinking about the social impacts of the programme led Kirsteen to embark on a part-time PhD with The Open University last February.

“Traditionally our work has been labour-based, but for the road I am working on now, there are just not enough people to employ so we have introduced mechanical excavators. That sparked the question: which is better?”

The question is not purely academic. “There is conflict between national and local government who want to build roads as quickly and cheaply as possible – which is the usual engineers’ approach – and aid agencies who want road building to generate poverty reduction through employment.”

Kirsteen also sees her PhD as opening up new career possibilities for the future. With the project in Nepal winding up, Kirsteen and her partner and 12-year-old son plan to return to Scotland within the year.

She fits in her study around the times when she is working in her office at Kathmandu, helped by the fact that ‘there is so much overlap between my PhD and my job’.

She holds monthly Skype meetings with her ‘fantastic’ academic supervisors Professor David Wield and Dr Peter Robbins, based at the OU’ s Milton Keynes campus, and emails them regularly.

“On the technical side of things I am very comfortable, but the academic analytical side is all very new to me. I have ideas, but I need a formal framework. My supervisors help point me in the right direction.”

Image: Kirsteen and her gear getting ready to cross the river by ropeway to reach the construction site