Rays of hope in South Sudan 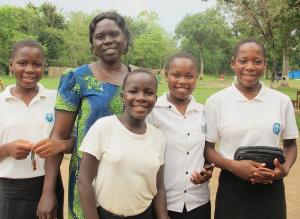 At the recent Open Impact Conference in Kampala, Open University Professor of Public Leadership Jean Hartley presented a case study of a pioneering school which could become a model for girls’ education in a country shaking off its troubled past.

On February 22 rival leaders in South Sudan are expected to form a Government of National Unity which promises to end decades of unrest and bloodshed, and open the door to much-needed social and economic development.

Among those rejoicing will be Ibba Girls School, a pioneering venture which provides free primary and secondary boarding education for academically promising girls, in a country which has been named as the world’s worst for girls’ education.

This remarkable school came into being after civil servant Bridget Nagomoro asked Professor Jean Hartley and Warwick University colleague Professor John Benington, who were running a workshop for Government officials in South Sudan in 2008, to help realise her dream of a girls’ school in her home village of Ibba in South Sudan’s Western Equatoria region.

Jean and John responded by setting up the Friends of Ibba Girls School (FIGS), a UK-based charity, to support the building and running of the school with fundraising and professional and technical advice.

Bridget gave up her national government job and returned to Ibba as local Government Commissioner to be actively involved in developing the school, and also completed an MSc in Development Management with The Open University.

The school benefits from the expertise of academics like Jean, an award-winning researcher in the field of public leadership and organisational change, who leads an annual developmental review. She says:

“The school has done exceptionally well in spite of the conflicts in the country. It made headlines last year when the six top primary school graduates in the state of Maridi were Ibba girls.

“By the time the top class of 40 girls graduate at 18 in 2022, they will make up five percent of all the girls completing secondary education in the whole of South Sudan – a country of around 11 million people.”

The working environment in South Sudan is a long way from what most academics are used to – the security situation is often volatile, but this has not prevented Jean and John, other FIGS Trustees and volunteer teachers from making regular visits to the school, which is set in a beautiful, fertile tropical forest with mango, teak and mahogany trees, butterflies and birds.

Its buildings are equipped with solar-powered water, electricity and satellite internet for study, and well protected by the local community and security forces.

And there are now real grounds for cautious hope as government and opposition groups appear to be coming together – the country has rich resources of forestry, agriculture, minerals, oil, and a young population eager to develop their country.

The Open University is ideally placed both to help and to benefit, says Jean.

“The Open University could do some great work in South Sudan, with many academic opportunities.

“There is the potential for applied research, for short courses and for teacher education – using the Teacher Education in Sub-Saharan Africa (TESSA) and FutureLearn platforms for teachers CPD and to build leadership and management skills for school leadership teams.

“We also have been developing a working partnership with the country’s key academic institution, the University of Juba, where the Vice-Chancellor has invited us to help to develop courses for the School of Public Service.

“If peace comes there will be a massive demand for professional training for police, social workers, school inspectors, local government and so on, which open and distance learning can really help with.”

Find out how to become a Friend of Ibba Girls School or sign up for the FIGS newsletter.