Is Reducing Aid in the National Interest? 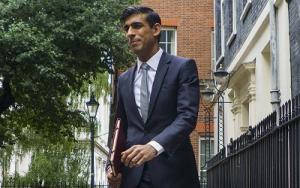 This article is written by Lizzie Babister, an OU researcher in Overseas Development Aid. Lizzie is currently based in the Development Policy and Practice department in the School of Social Sciences and Global Studies.

On the face of it, Rishi Sunak’s reduction of the UK’s Overseas Development Aid (ODA) Commitment from 0.7% to 0.5% of GNI would seem to be simply following protocol. The International Development Act of 2015 allows for a reduction in ODA spend due to a shock to the fiscal situation, such as record borrowing in a global pandemic. The announcement, however, is the latest in a series of actions taken by the current UK government that contrast with statements it has made concerning ODA, repeatedly reconfirming a commitment to aid, while dismantling the resources aid requires. In 2019 the Conservative and Unionist Manifesto promised to maintain the commitment to spend 0.7% GNI on development. Then in June 2020, the Prime Minister announced that the Department for International Development and the Foreign and Commonwealth Office would merge. At this time the Prime Minister pledged that DFID’s budget and the commitment to 0.7% would be maintained. ODA was then cut in July by £2.9bn in anticipation of a shrinkage in the economy, at which point Foreign Secretary Dominic Raab said the UK would still meet its 0.7% commitment. By November, however, the Chancellor, Rishi Sunak had announced that ODA will be cut, stating that spending on ODA was “difficult to justify to the British people especially when we’re seeing the highest peacetime levels of borrowing on record”.

Aid in the National Interest

Others have argued that it is difficult to justify a cut to ODA at a time when UK public health is at risk at least in part from the state of global public health. The relationship between ODA and UK national interests was previously well established in government policy. While the UK government requires its implementing partners to follow the Red Cross Code, providing aid on the basis of ‘need alone’, the decisions a government makes about its budget ultimately require justification to its tax-payers. As far back as the last millennium, the UK government recognised that while ODA benefits the poorest in the world, at the same time the elimination of world poverty is ‘in the national interest’. Many of the problems which affect the UK, for instance war, crime and, most notably, health pandemics, have been explicitly recognised by UK governments to be caused or exacerbated by poverty. By 2015 when the 0.7% commitment was enshrined in law, the relationship between ODA and the national interest rose in prominence to become the sub-title of DFID’s new aid strategy ‘UK aid: tackling global challenges in the national interest’. The strategy aimed at tackling challenges that “directly threaten British interests”.

Despite ringfencing the allocation for ODA in law, and perhaps because of this ringfence, there have since been various attempts to short circuit the relationship between ODA and the national interest by blurring the notional boundaries between the two. For instance, in 2018 the Secretary of State for International Development, Penny Mordant, suggested that profits generated from private investment in development projects should be included in the 0.7%. At the time, Kate Osamore, the Shadow Secretary, warned against this approach and the dangers of putting profit before development objectives. By 2020, we see UK government confidence in the relationship with ODA wane to the point where the Prime Minister stated that UK aid spending has been “treated as some giant cashpoint in the sky that arrives without any reference to UK interests".

Defence and Trade over Aid

The 2015 UK government believed ODA gave us global leadership, but current figures show that the 2020 UK government would prefer to work largely through defence and trade. A different type of global leadership is sought. The ODA cut may be justified as a saving in the face of borrowing, since it represents a 15.2% cut in the FCDO budget, but zoom out a little and other departments have clearly received comparatively large investments. 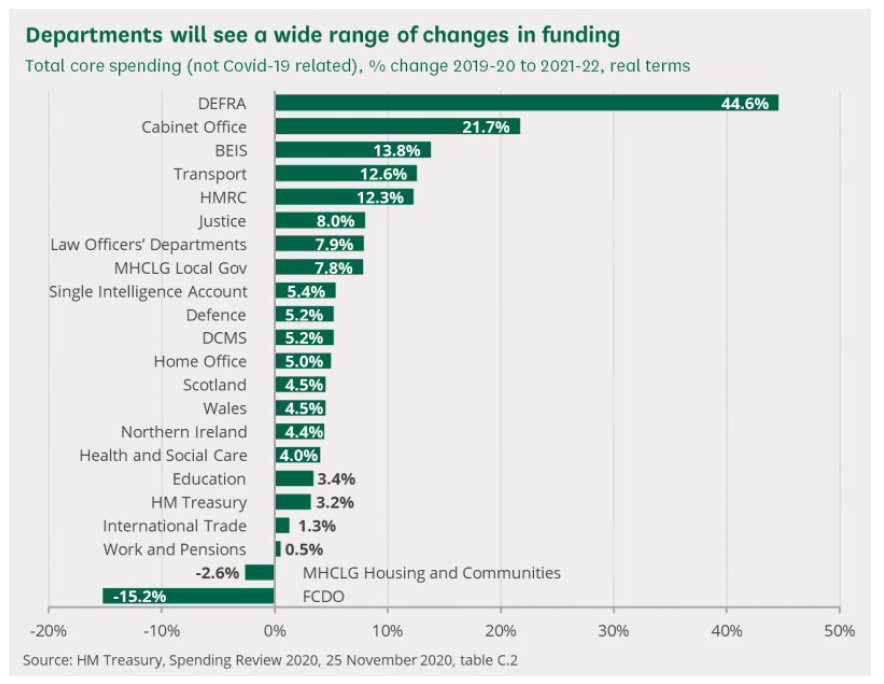 Rishi Sunak bracketed the ODA cut in his Spending Review Speech with an increase in investment in both defence and trade. While there are no assurances of when or whether the ODA spend might be restored, the budget increase for the MOD is projected over the next four years. DEFRA, meanwhile received a 44.6% budget increase. This signals, in part, a change in emphasis from preventing global problems to defending the nation from them, but it is also a change from a long term outlook to short term priorities. Defence and trade are two approaches that could be perceived to positively influence the UK’s own economy in a shorter timeframe than ODA.

A Beacon of Freedom and Human Rights

While the UK government has described the reduction in aid as a consequence of resolving a short-term economic shock, it remains to be seen how this move will pay off in the longer term. Returning to the relationship between national interest and poverty, this reduction in aid is predicted by international development practitioners and conservative ministers alike to contribute to an increase in poverty, exacerbating war, crime and pandemics. These global challenges in turn generate an increase in global instability, including economic shocks and conflict in the longer term, a future recognised even by some senior military advisers to government. Having reduced the budget for projecting soft power, such as peacebuilding and global public health, it remains to be seen whether the hard power of defence and trade can sustain the UK as the “beacon of freedom and human rights” that the Conservative and Unionist Manifesto so recently aspired to.