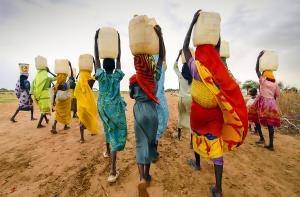 Research led by The Open University is behind a potentially ‘transformative’ regional monitoring system being rolled out across 16 countries in southern Africa.

The Results-Based Regional Monitoring and Evaluation (RBME) initiative enables governments in the region to measure whether their policies for economic and human development are working in practice.

The RBME is the result of a collaboration between the Southern African Development Community (SADC) and The Open University working in partnership with academia, civil society and governments.

It takes its inspiration from an innovative monitoring ‘toolkit’ developed through a research project called PRARI (Poverty Reduction and Regional Integration) led by Open University Professor of Social Policy Nicola Yeates and funded by the Economic and Social Research Council (ESRC) and UK Department for International Development.

SADC’s RBME has now scaled up that idea across many different sectors.

The RBME incorporates data on hundreds of indicators – measuring for example changes to gender equality, health, and social inclusivity, as well as economic and industrial development – which can be collected and analysed in a way that is comparable across all 16 countries.

“The RBME  is potentially an extraordinarily powerful policy tool for the region,” said Professor Yeates. “The data will provide a powerful source of comparable evidence to inform national and regional policy making.

“There is real potential to improve both economic performance and human well-being outcomes at the same time, and to alter the trajectory of regional social and economic development in a way that gives as much priority to social policy and human welfare as to economic policy and trade issues.

“It is potentially transformative for these 16 states, and the close on 300 million people who live there, half of whom are living in poverty.”

The idea that inspired the PRARI project, which began in 2014, was to devise a regional integration monitoring toolkit which would include social indicators of regional development outcomes.

Previous such toolkits had only used economic indicators, so the PRARI research was an important step in integrating quality of life, health and social welfare issues into policy-making and political decision-making about regional development policy.

The project was also innovative in incorporating a participatory research method which aimed to ensure that the perspectives and needs of all those served by the monitoring system are reflected in its design.

Since the ESRC funding ended in 2016,  SADC has succeeded in gaining billions of euros in funding from Germany and the EU to support the monitoring system’s implementation.

The system has been rolled out and evaluated across eight SADC countries, and roll-out to the remaining eight is now due to begin.

Professor Yeates said she is ‘absolutely delighted’ by the way their original research inspiration has been found so useful to SADC countries and the SADC regional secretariat.

“As a researcher, one can never be totally certain of what difference research will make to the ‘real world’ of policy-making.

“SADC’s decision to establish the large-scale RBME system feels like a validation of our research methodology and the good, timely social policy research idea we had all those years ago.

“Now SADC will have the tools, the resources and the know-how to evolve a regional policy monitoring and evaluation system that suits them, and that they can adapt and develop over time according to their circumstances and priorities.

“This innovation is a vital step along the path of better health and social development outcomes. It tangibly expresses what it means to prioritise social equity in regional integration policy processes.”

Find out more about the research in this Open Access article, which will be the focus of an event in London on 8 July.