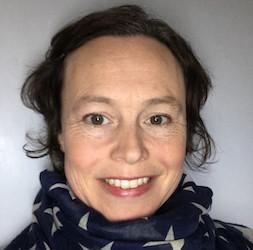 After graduating from the Open University’s MSc in Global Development Management, Celia Bartlett secured a PhD studentship under the prestigious Grand Union Doctoral Partnership, which unites the OU with Brunel University London and the University of Oxford.

When she composed her PhD application Celia (pictured) made a point of including her life experience as a primary carer for her two children, despite the people she showed it to telling her this was ‘a bit bonkers’.

“For me it’s a big part of where I’m coming from, having some insight into the pressures of trying to balance everything,” she says. And she believes it helped tip the scales in her favour.

Celia developed an interest in gender issues while studying for her OU Masters in Global Management Development, and it is a key aspect of her PhD proposal, provisionally titled: Can Synergies between Civil Society and Corporate Social Responsibility promote inclusive and sustainable empowerment for women through more equitable trade of cooperative coffee producers?

Gender was also the focus of her Masters dissertation, but in an arena far removed from coffee production. “I live in Dorset and enjoy surfing, and there is an issue with surfing being a gendered space, with men spending more time surfing and progressing further. I thought that was interesting to look at.”

Her resulting thesis On whose wavelength? Institutionalising gender equity in UK recreational surf space was subsequently presented at the annual conference of the Institute for Women Surfers, a feminist organisation with the goal of making surf sports equally accessible to all.

And on the same theme she has also carried out research for a prosthetics charity, Legs4Africa, to help inject gender awareness into its programmes.

Although a relative latecomer to academia, Celia has long been interested in development. Before the birth of her children, now aged 14 and 12, she worked in programme support in Oxfam’s Humanitarian department.

“When the children were a little older I really wanted to go back to what I was interested in and I was so pleased to find a Masters I could access from home and fit around bringing up the children,” she says.

The idea for her PhD grew out of a volunteer role she secured with Fairtrade after completing her Masters last year. She was carrying out research into co-operatives producing coffee, which could be used by corporations to show their customers how Fairtrade makes a difference.

The work raised a number of questions in her mind, not least – if corporations are seeking to promote women’s roles as coffee producers in order to sell their products, does this potentially shift the balance of power, however slightly, in favour of women, who are the least-empowered workers in a traditionally male-dominated industry?

Spotting the ads for the Grand Union PhD scholarships she put together her proposal and ‘articulated my issues at interview’. “When I heard I’d been successful I was incredibly pleased, really surprised, and a bit overwhelmed.”

And Celia successfully secured co-funding from the OU’s Robert Beevers Memorial Studentship, a bequest by one of the university’s founding fathers to support OU graduates doing PhD research.

Owing to Covid-19, Celia, although a full-time researcher, has barely seen the OU campus at Milton Keynes, and carries out her work from home in Dorset.

She’s now at the demanding stage of unpacking what she acknowledges is a ‘huge’ topic. “There are so many questions involved: the nature of liberal feminism, the feminisation of agriculture, how ‘empowerment’ might be defined, the role of civil society, and – which is really at the centre of my thinking – how it relates to the development of corporate social responsibility.

“What is the relationship between corporate social responsibility and empowerment? Civil society organisations are promoting coffee produced by women and women’s leadership, management and technical skills in the industry, but is enough account being taken of domestic duties and childcare that are predominantly being carried out by women?”

One strand she is considering is the emergence of ‘relationship coffee’: smaller UK-based coffee roasters who are working with coffee-producing cooperatives in a more direct way. She's interested to explore potential pathways towards more equitable trade within this model.

Ultimately she hopes her research will have a real-world impact, hence, she says, her approach leans towards the pragmatic. “Within the current neoliberal paradigm, how can we identify realistic points of access that can actually make a difference?”

Celia’s is the second of two PhD Studentships in Development Policy and Practice supported by the Robert Beevers Memorial Fund. The Fund also makes awards of up to £1000 to support Open University Honours graduates studying for an research OU degree.