'Wilding' for a brighter world 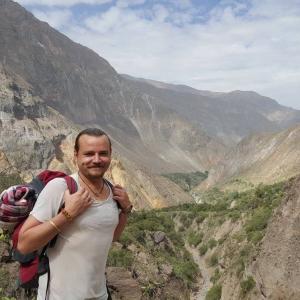 Jack Cole (pictured) gained his MSc in Development Management with The Open University while working as a journalist in South America, covering issues including environmental destruction, corruption and illegal gold-mining. He talked to us about his new role in 'wilding' at UK-based charity Restore Our Planet.

How did you get your new job?
I was volunteering for the organisation and there was an opening for a project coordinator and fundraiser. Having the Master’s was really crucial, it got me over the finishing line.

What does Restore Our Planet do?
It’s a private foundation that started out as Restore UK, a grant-making organisation. It was founded in 2001 to invest in the protection and restoration of Britain’s habitats. It then went on to expand and incorporate the same issues on a global scale. That’s why it changed its name to Restore Our Planet in 2018. This year is our 20th anniversary and we’ve now worked with over 100 organisations on projects. It was founded by businessmen and we are successful because Restore talks the language of business. There’s a big culture gap between conservation NGOs and City folk, our organisation very much bridges that gap.

What does your role involve?
It’s a new role for the organisation so it’s not set in stone, I’ll be wearing a few different hats and be involved in fundraising, social media, starting a biweekly podcast and helping to coordinate Britain’s rewilding efforts – I think ‘wilding’ is the preferred term now – for projects across the UK.

What is ‘wilding’?
There’s a bit of a misconception that it’s about just leaving the land to go wild again, but it’s a really proactive approach that involves boosting the native flora and fauna that used to live in abundance and are essential to the ecosystem.

How does this work?
For example, the European bison. A woodland canopy that doesn’t let any sunlight get to the ground is not a very productive ecosystem. If you introduce bison, they eat select saplings – unlike deer which eat everything - and they knock down dying trees, so you get more light in the undergrowth and the dead trees provide a habitat for invertebrates, which in turn bring in birds.

Lynx is a really exciting one – they change the behaviour of deer to make them more skittish, they move about more and don’t eat as many saplings,  which gives the younger flora a chance to flourish.

Beavers – what they do to river systems is extraordinary. They completely change the pattern of water flow so that more nutrients get into the soil system, which affects what grows, which brings in a greater variety of animal species.

In my podcasts, I plan to talk to experts on all of these issues and phenomena. That’s something I am really excited about.

Aren’t people wary of species like lynx and bison?
The problem comes when organisations, as passionate as they might be, perhaps don’t communicate as they should do with local communities. It is really important that the local people are brought into the decision-making process and feel real ownership.

What are your long-term aims?
In 5 to 10 years we should see some exciting species back. There are already about 700 beavers I believe. There will also be many iconic species like red squirrels, pine martens and bison ideally on the increase.

For me the real challenge is invertebrates. One of the scarier sides of climate change is that ‘nice’ insects like butterflies and beetles are disappearing, their place will then be filled with more apocalyptic environments with flies and cockroaches thriving.

We are at a crucial moment – but what’s really exciting is there has been a realignment of interest in the environmental world, because of what’s happened over the last year or so.  Most people have experienced a dash of apocalyptic scenarios, which has gotten people thinking more about the state of the planet generally.

In this field, and the line of work of many others, so many dedicated, intelligent, often brave people have been working on these problems in the background for a very long time. We don’t want people to get complacent, but at the same time, I really do think we will get through these perils and out the other end, we just have to continue to pull together so we can make the world a brighter place for those who come after us.