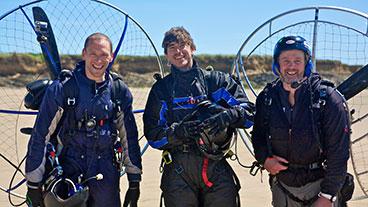 The history of Ireland is explored in a new Open University/BBC TV series which looks at its scenery, prominent landmarks, politics, heritage and culture.

Author and presenter Simon Reeve leads the journey to an island he’s never really explored, exploring breath-taking scenic views, and the surprising political and social history of the Irish; from the recent financial crisis that hit the Republic of Ireland in 2008 and the legalisation of gay marriage, to Northern Ireland’s two distinct forms of political expression, unionism and nationalism, and those trying to overcome old political animosities.

Ireland With Simon Reeve is a two-part series for BBC Two and visits the site of the Norman invasion in 1170, Bannow Bay; the Giant’s Causeway and the Dark Hedges, famous for featuring in the TV hit Game of Thrones.

Commenting on the role of The Open University in the series, Simon Reeve commented, “I was absolutely delighted to hear that The Open University was backing the BBC Ireland with Simon Reeve series and will use the programmes in study courses. It’s a huge honour to make programmes that tell people a little bit more about the world we live in, but it’s also an enormous responsibility, so the advice and guidance of the expert academics from the OU was absolutely invaluable. In addition to their historical knowledge, it was also particularly beneficial to have the input and guidance of an academic who lives and works in Belfast to give us added insight into the complexities of understanding the enormous changes which are still ongoing in Northern Ireland.”

The academic lead on the series, Janice Holmes, is an Irish historian in the Faculty of Arts and is based at The Open University’s Belfast office. She said: “It’s been wonderful to watch Simon on his journey of discovery across Ireland. The programme really conveys his genuine surprise and enjoyment of the beautiful Irish landscape, its friendly and welcoming people and its distinctive religious and political culture.”

The first episode of Ireland With Simon Reeve will be broadcast on Sunday 22nd November at 8pm on BBC Two with the second and final episode of the series being broadcast at the same time on Sunday 29th November.

Viewers can find out more about the series on OpenLearn, The Open University’s free learning platform which includes an interactive timeline of Irish history and the video trailer.