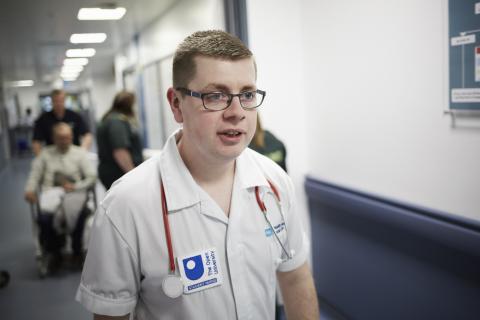 The Open University is marking its 50th year anniversary this month by telling its remarkable story through the power of photographs, in a collection released today. Former and current OU students, including a builder from Belfast who changed his career to study Nursing after a life-changing accident, a prisoner turned academic, and a woman research pioneer in moon exploration, all feature in the new collection by world-famous British photographer Chris Floyd.

The Open University, founded in 1969, has grown to support over 45,000 students and learners in Northern Ireland, and 19 million across the UK. The OU is the largest university in the UK and supports students across England, Scotland, Wales, Northern Ireland, the Republic of Ireland and around the world.

“We started as a revolutionary concept in 1969, and fifty years later we continue to push boundaries to be open to all and make education accessible to everyone, regardless of background or circumstance. The photography collection is a great demonstration of this – it shows that there is no typical Open University student, and higher education can fit into your life in a multitude of ways, if you have the drive and commitment to make it happen.”

Floyd’s photographs include a portrait of Steven Ryan, who started out his career as a bricklayer, but was inspired to start studying for his BSc in Adult Nursing with The Open University in Northern Ireland following the exceptional care he received from NHS nurses after a serious and life-changing accident in the workplace. He says of the experience:

“I am very proud to have the opportunity to study nursing with the OU – it has supported me in developing a career which I am passionate about. As a Health Care Support Worker, my course is sponsored by my employer, the Belfast Trust, meaning I’m able to earn a salary alongside my studies. For me, the chance to become a nurse means I can make a difference and have a positive impact on people’s lives.”

Another of Floyd’s photographs features Hannah Sargeant, who is studying for her PhD in planetary science, with her research focused on the first mission to the south pole of the moon to extract water from moon matter – a revolutionary Space Agency mission that has never been done before. Sargeant is breaking boundaries as one of the only women in the field of moon exploration, and credits the OU with her career progression:

“What The Open University has offered me is very unique – I’m able to do practical and potentially groundbreaking research in an institute that not only accepts, but encourages people who don’t fit an expected norm. My confidence in myself and my work has grown during my time at The Open University, and I’m now a STEM ambassador and want to encourage more young people to join the space industry.”

Stephen Akpabio-Klementowski, an OU graduate and former prisoner also features in the collection. He began studying with The Open University while serving a 16 year sentence and credits the university with helping him to turn his life around. After studying Social Sciences in prison, he went on to join The Open University as a member of staff, where he now helps those studying in secure environments. Stephen said,

“Back then, I couldn’t even imagine the life I have now – I am an entirely different person, and for the better. Being given the opportunity to study for real, meaningful qualifications while in prison is a lifeline. My hope is that the work I do now can help other people who were in my situation build a better life for themselves.”

The special collection, titled 'The Open University: 50 years' also includes newly released archive images dating from 1969, when the ‘University of the Air’ was founded, including rare pictures from events such as the Foucault Experiment recreation, the OU’s first ever graduation ceremony at Alexandra Palace, and revolutionary home science equipment in use.