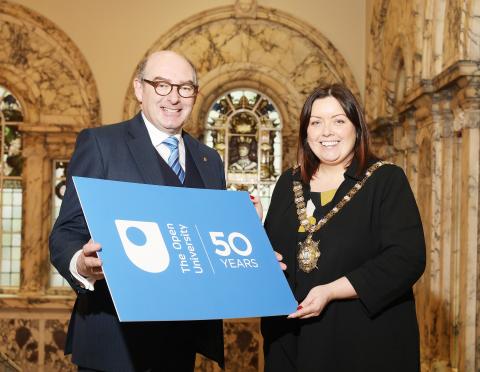 By challenging the traditional concept of who could access university, The Open University flew in the face of established higher education when it was founded in 1969. The bold vision of Harold Wilson (the then UK Prime Minister), made a reality by the tenacity of Jennie Lee – Minister for Arts in his government - created a new university which was founded on the radical principle of being ‘open to all’.

Since 1969, more than 2 million people have come through The Open University’s virtual doors.  From 24,000 students in its first intake in 1971, there are now have over 174,000 people studying with The Open University. This makes it one of the largest Higher Education providers in Europe.

Although much has changed for Open University students since 1969 in terms of the technology they use to study, their motivations and ambitions remain the same

25% of current Open University students lack the qualifications they need to get into traditional university but they are able to excel and achieve their goals by studying with the OU. Many of these people want to progress at work, want to gain that much dreamed of qualification, want to change jobs, and are self-motivated and determined.  The Open University also has more disabled students than any other institution. This is down to the flexible, distance-learning method of teaching that enables people to fit their studies around their life – to juggle their jobs and domestic responsibilities alongside their studies.

“50 years on, the world is a different place from where The Open University started but our founding principles continue to drive everything that we do – to be open to people, places, methods and ideas.

In 2019 we are undertaking a year-long programme of activities and events to inspire pride in The Open University, what we do and how we help people transform their lives through higher education. We are very grateful to the Lord Mayor of Belfast for helping us to launch our anniversary today and we hope many people will be able to join us throughout the year.”

“Belfast is enriched because of the existence of The Open University – such a simple, exciting idea that has helped so many people achieve their dreams.

I speak to people daily – members of my own family and those inside the Council – who have improved their lives and jobs prospects, or just challenged perceptions about themselves by completing qualifications with The Open University.”

Speaking to The Open University, she said: “You have given people freedom – freedom to challenge restrictions on time, on when and how they have to achieve. You have opened doors and allowed young and old and people of all abilities to flourish, to reimagine their lives, to make new friends, to develop their skills, and to critically analyse the world around them through education. Here’s to another golden year of opportunity and many more of them. Happy 50th from Belfast.”

1.       All anniversary events will be posted on www.50.open.ac.uk and promoted on The Open University’s social media channels: @OUBelfast (Twitter) and @OpenUniversityNI (Facebook).