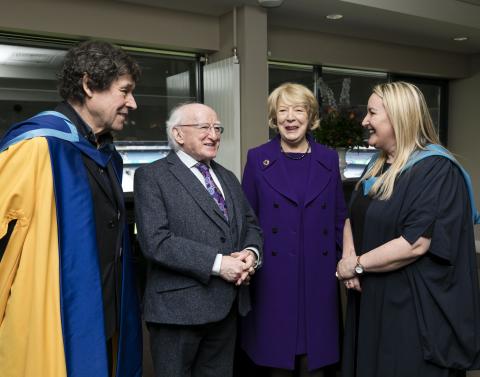 The President of Ireland Michael D. Higgins made a special address to graduates at The Open University in Ireland degree ceremony at Croke Park, Dublin today (Friday 5 April).

He congratulated the 76 graduates from across Ireland and beyond on their achievements in a range of subjects. Many of them have fitted their study around work or family commitments, some have a disability or live in a remote or rural community, while others did not have traditional university entry qualifications, or have come from low-income households.

The President also congratulated The Open University on reaching its 50th anniversary, and how its founding principle to open up education to all is just as relevant today as it was in 1969.

At the ceremony, actor Stephen Rea was honoured with the degree of Doctor of the University for his services to the arts.

The Open University makes honorary awards in line with its mission to be open to people, places, methods and ideas, and the promotion of social justice through the development of knowledge and skills.

One of Ireland’s most distinguished actors, Mr Rea has produced a diverse and consistently outstanding body of work for stage and screen. He was cast as Fergus in The Crying Game which won the 1992 BAFTA Award for Best British Film, and earned him a nomination for Best Actor, alongside roles in critically acclaimed films including Michael Collins, The End of the Affair and Interview with the Vampire.  Most recently, Stephen appeared in Black 47, the first film about the Irish Famine which has broken Irish box-office records, and appeared in the latest run of Cyprus Avenue at the Royal Court Theatre. His pioneering efforts with the Field Day Theatre Company have demonstrated the critical role that culture and the arts have in understanding and overcoming political division.

For all of the graduates, today’s ceremony marks the culmination of years of hard work and a commitment to learning.

One of those graduates is Sharon Keegan from Mayo. Unable to attend university for personal reasons when she left school, Sharon always felt she had underachieved in comparison to her colleagues who had graduated.

She says: “Over the years I would get an OU prospectus, think about it and put it aside. Eventually my husband bought me an expensive calculator, some Maths revision books and told me to just go and sign up for the course, which I did.

I chose to study with the OU because of the flexibility.  This was important because I had a full-time job and a family.  The distance learning really suited me for these reasons. During my degree my father was seriously ill and sadly passed away, but I was able to take some time out of my studies and return to them.”

Now having reached her graduation day, Sharon says: “The whole experience was tough but it was also one of the best things I have ever done.”

“The Open University is an inspired transformative intervention into higher education, offering access to all who desire it, without prejudice. I am truly grateful to have been offered an honorary doctorate from this most democratic of institutions.”

John D’Arcy, Director of The Open University in Ireland, said:

“Today is a remarkable day for our students who have worked incredibly hard to achieve their qualifications. We are proud to see them cross the stage today at Croke Park. Welcoming Stephen Rea to The Open University family is also a huge accolade for us. We are delighted to acknowledge his contribution to the arts and his major accomplishments in acting.

What makes this an extra special occasion is having the President of Ireland Michael D. Higgins attend and congratulate each and every graduate on their hard-earned success, and helping The Open University celebrate 50 years of opening up education to all.”