OpenTALKS: Blue Planet II: the science behind the BBC series 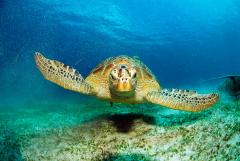 Join The Open University’s academics who worked on the BBC Blue Planet series to hear about the science of our oceans.  Marine scientists Mark Brandon and Phil Sexton have spent years working in oceans all around the world including Antarctica, the Atlantic and the Arctic, and with the BBC Blue Planet team since 2014. Using video footage from Blue Planet II, they will talk about some of the key issues affecting our oceans, including how they ‘work’ and why they are important. If you are a Blue Planet fan, this is not to be missed!

This event is fully booked, however a waiting list is in operation. Please register your interest here.

This is event is part of the OpenTALKS series – a programme of events to celebrate The Open University’s 50th anniversary.