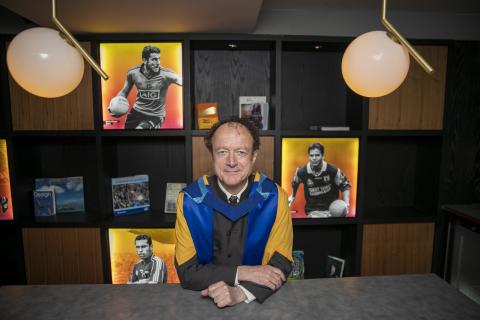 Niall Stokes, long-standing founder, and editor of the popular Hot Press magazine was today (8 June) bestowed with the honorary degree of Doctor of the University by The Open University in Ireland (OUiI), at a ceremony in Croke Park, Dublin.  The ceremony was the first OU graduation in Ireland since the start of the COVID-19 pandemic. The celebratory event saw over 100 graduating students joined by friends, family, university alumni and former honorary graduates to mark the occasion.

Honoured for his unique and influential role in Irish cultural and political life, Niall has been working on the cutting edge of Irish music and journalism for over forty years. The recipient of numerous awards as an editor and journalist, Niall celebrated the thousandth issue of Hot Press in 2019 and has remained at the helm of the magazine since its inception.

"It is a great privilege to be named today as the recipient of an Honorary Doctorate from The Open University. I am profoundly grateful for the unique recognition which this honour represents, of what we have achieved in Hot Press since the magazine was launched in 1977 – and of the contribution which all the people who worked for Hot Press over the years have made, individually and collectively, to Irish music, to Irish culture and to Irish society. It feels especially appropriate, coming from The Open University, a wonderfully idealistic organisation which was founded back in 1969 with the specific mission of democratising third-level education, and making it accessible to all, irrespective of gender, class, age, creed or race. Long may it continue to thrive, with its enlightened, egalitarian mission."

Born in Dublin, Niall read English and History at University College Dublin before embarking on his own career as a musician and songwriter.  After experimenting with freelance journalism, he founded Hot Press in 1977 amid the cultural intensity of the punk revolution and the magazine has remained true to its roots ever since.

A long-time advocate for Irish music, Niall and Hot Press have provided a launch pad and lasting home for some of the most significant artists in Irish music, from Sinead O’Connor to Snow Patrol, and The Boomtown Rats to The Script. One of Hot Press’s early successes was a cover story on Thin Lizzy, which led to a lasting friendship with frontman Philip Lynott.  Niall has since become an important curator of Lynott’s legacy, producing and directing an exhibition and writing books on Phil’s life and work.

From the outset, Niall and Hot Press sought to create a space where contemporary political and social questions were freely debated.  He showed a willing to challenge religious and political authority, and to engage with perspectives which traditional outlets shied away from. Niall’s editorials continue to set the tone for the magazine, shining a light on political injustice and championing progressive causes, from the availability of contraception to support for gay marriage, as well as playing a leading role in the successful campaign to repeal the Eighth.

John D’Arcy, Director of The Open University in Ireland said; “Niall’s pioneering approach to journalism has provided a unique showcase for some of Ireland’s most significant musicians, writers and commentators of the past few decades.

“Thanks to Niall’s leadership, Hot Press magazine remains as relevant and vibrant as ever, attracting new generations of readers, and acting not just as a witness but a driver in the transformation of Ireland over recent decades.  It is a pleasure for The Open University in Ireland to honour Niall’s unique and essential role in Irish cultural and political life.”