The oddly harmonious relationship between science, religion and spirituality - from my perspective

Foreword: this blog post is not riddled with pseudoscience, and its aim is not to convince you that your chakras are blocked.

Up until last September, working within a scientific community had been a thing of my dreams. My fairy tale role would be one paired with a white lab coat; to work alongside people who blossomed when consumed with science. Since taking my position, I’ve been exposed to many new ideas and experiences. My preliminary acquaintance has also unveiled a general disregard for anything non-numerical by many scientists.

This came of a surprise to me. Richard Dawkins himself has before compared biology to a “mystery story” and scientists to Prophets, but also states to enjoy the “good-humoured ridicule of Religions” on twitter. I believe these ideas to be both oxymoronic and reflective of the larger research environment, or of what I have so far experienced, both in theory and application. In this blog, I’ll (aim to) explain why.

Firstly, I must discuss the connection between religions and spirituality. The most globally prevalent case of pot-kettle-black. They differ by institutional design. Religions typically rely on structured, objective stimuli to connect one to God, the One, Allah. Spirituality usually homes in on a path of self-discovery on which an individual becomes connected to a higher power via a higher state of consciousness. Just like in scientific research, spiritual teachings also evolve when the knowledge of others is collated and expanded upon. Oppositional to the foundational, usually fear-based principles typical of religion (Brady, 2019).

Despite their apparent differences, religion and spirituality embrace many blurred lines. Their archetypal customs often hybridise. Both delve into the questions “Who am I?”, “What is my purpose?” and the biggie, “What is the meaning of life?”. Three malleable questions, all central to scientific study.

Continuing onwards, prayer is meditation’s parallel. In ‘The Relaxation Response’, Dr Herbert Benson describes the physiological benefits of meditation. Throughout his studies, Benson showed that practicing meditation could counteract many harmful effects of stress including the reduction of pain, anger and anxiety. Alleviation of these physiological symptoms can also come from worshiping theistically, as proclaimed time and time again by religious practitioners. Furthermore, thirty pages of Benson’s book decipher connections between historical and present-day examples of meditation (including religious practices, cultural practices and literature).  The repetition of meditative principles shows interdisciplinary interconnectedness. Interconnectedness which, by definition, incorporates science. I believe the scientifically proven benefits of meditation (and thus by connection, deep prayer and worship) is just a particle of evidence showing that spirituality and religion have a far larger part to play in the sciences than most people regard them to. 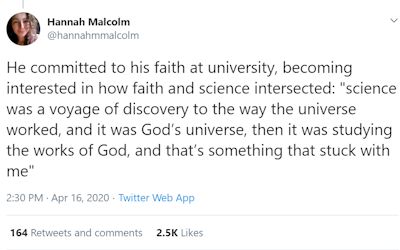 The moment I read this adjacent quote, I experienced a personal revolution. It is commonplace in the West to believe that science, over time, has continued to disprove the existence of God. Stephen Hawking famously spoke of this in ‘The Grand Design’, and I myself have previously believed this. However, one must ask why we separate our own knowledge of natural phenomena from something larger than our own senses allow us to comprehend? It’s a synonymous arrogance to that of why we tend to observe the natural world through an anthropologistic, anthropomorphistic eye.  Western science has wrongfully positioned data and information at the top of the Knowledge Pyramid; in doing so, it has unfortunately disregarded wisdom,  lost its humility and become narrow minded.  “Wisdom adds value… It may well be that wisdom is essential to differentiate man from machines.” (Ackoff, 1989). Interestingly, religion can be just as brutal in its disregard for data and information. Discounting science is an almost uncomprehendable farce. It shows nothing but ignorance to discredit credited information. We humans are limited, so is science and so are religions. By disregarding other knowledges and belief systems, we are choosing to further limit the potentials of all three.

These arguments may pose as reasons to why science is irrelated to religion and spirituality. I think the differences are resultant of man-made segregation, not from the customs of these knowledge systems. When you strip these three systems down to their cores, delve passively past any indoctrination or bigotry; you discover that religion, spirituality and scientific research each have the same heart… that of enlightenment, aid, and growth. Though they can differ in practice, they reflect one another in principle.

Science is something that I have consistently used to anchor myself into place. Having something in life which I felt was impenetrable and unquestionable has always given me security. Now, from working in a research environment, knowing that science faces just as much ambiguity as everything else in life has helped me find stability and peace in my world’s dizzying disarray. These are undeniably spiritual experiences, which I am sure science will continue to offer me throughout my career and lifetime. I hope that in the future, interconnectedness is seen en masse by people from all walks of life; that science, religion and spirituality can exist not only more harmoniously, but in benefit to one another.

Writing this blog has been HEAVY work! These are huge ideas that I am only just starting to delve into, and I’m sure that I’ll be arguing with a lot of the things I have written in the future. However, I know that in this world, we are in desperate need of more synergy and the abolishment of segregation in all its forms… I hope that reading this may help you with both

Brady, Adam (2019). Religion VS Spirituality: what is the difference?  Available at: https://chopra.com/articles/religion-vs-spirituality-what-is-the-difference (Accessed: 12/06/2020)

Grace Duffield
is a Microbiology Technician Apprentice
in the Faculty of Science, Technology, Engineering
and Mathematics at the Open University