What 19th-century prison education can teach us today

Education has a transformational impact on people in prison and other secure environments and is crucial to rehabilitation. It builds prisoners’ self-respect and self-worth and broadens their horizons. However, Dr Rosalind Crone argues its vital role in English history is often overlooked.

The Open University has pioneered prison education for more than 50 years. Yet systematic teaching and learning in prison goes back much further, to the turn of the 19th century. Unfortunately, criminal justice and education historians alike have overlooked this fact.

Over the past decade, I’ve been recovering the lost landscape of 19th-century prisons to help people understand the development of the penal system, the emergence of prison education and what the latter can tell us about the role and value of education in society as a whole.

The penal system in 19th century England was incredibly complicated. There were various types of prisons for people accused of committing crime or convicted of minor offences, including lock-ups, bridewells and gaols (alternative spelling of jail, prominent until the early 20th century). Until nationalisation in 1878, these prisons were typically run by the county or borough authority, though sometimes by cathedrals or universities. Those convicted of more serious offences went to convict prisons, including hulks (decommissioned naval ships), under the central government's authority to await transportation to penal colonies or, increasingly, to serve long terms of imprisonment.

Such was the nature of this system that not even state officials of the time – let alone historians today – knew how many prisons existed. It has also meant that studies of 19th-century prisons have primarily focused on penal policy or institutional case studies.

I began my research with a detailed examination of an educational programme devised by prison chaplain John Field at Reading Gaol in the 1840s. Field convinced the authorities to replace hard labour at the prison with teaching prisoners to read and write. He gave prisoners a Bible, taught them how to read it, and set them written examinations on what they learned.

Field believed that education and religious instruction would transform immoral offenders into law-abiding, productive members of society. Sometimes he negotiated early release for those who had applied themselves to learning.

Like many other prison chaplains, John Field collected information on prisoners’ education before incarceration. Until I began my work on prison records, much of what we knew about literacy in 19th century England came from marriage registers. On their special day, brides and grooms signed the register. Those who signed with a mark (such as a cross) were regarded as illiterate or unable to read and write.

In contrast, at prisons, new arrivals were tested and categorised according to their ability to read and write, to read only, or to do neither. Using chaplains’ reports, prison registers, and criminal calendars (pre-trial prisoner lists) from Berkshire, Lancashire and Suffolk between 1840 and 1870, I extracted the educational profiles of more than 18,000 prisoners.

These records offered the first comprehensive account of the literacy of men and women who passed through the criminal justice system in Victorian England, including new insights into the experiences of those who could read but not write. They also challenged some long-held theories by suggesting that younger people were not more literate than their older counterparts and that prisoners were not less literate than non-offenders in their communities.

What about education inside the prison? Was John Field’s programme at Reading Gaol unique? To find out the answers to these questions, I embarked on a significant research project to recover every prison operational in 19th century England and used official reports and surviving institutional records to reveal what – if any – education was available inside each one. 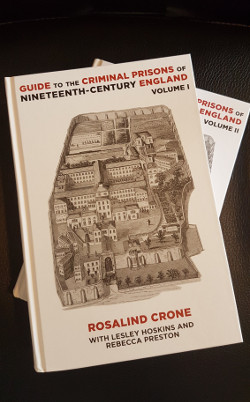 In 2018 I published the two-volume Guide to the Criminal Prisons of Nineteenth-Century England, which contains profiles of more than 800 English prisons. Each profile provides critical information such as operational dates, location, jurisdiction, annual and daily population statistics and a list of surviving records.

Later this year, I will publish the rest of my findings in the ground-breaking monograph – Illiterate Inmates: Educating Criminals in Nineteenth-Century England – which tells the story of the rise and fall of the prison school.

With the support of colleagues in the Centre for the History of Crime, Policing and Justice, I also transformed the Guide into a free and fully searchable electronic database, ‘19th Century Prisons’, on the Prison History website. Because records about prisoners and prison staff often contain an exceptional level of detail about individuals, such as their birthplace, residence, religion, education, occupation and physical appearance, this database attracted significant attention from genealogists and people interested in uncovering their family history.

In 2019, I added a second database to Prison History. ‘Local Lock-ups’ contains details of more than 900 buildings used for the temporary confinement of accused criminals, drunks, vagrants and petty criminals in towns and parishes across Britain. Many continue to shape our landscape today. Members of the public have contributed more than 300 of these buildings to the database and have updated information on hundreds of others.

Over the last three years, I have received tremendous feedback from people who said they planned to use what they’d learned through the website in museum tours, academic teaching and research. The National Trust’s archaeologists have also asked me to assist with building identification.

In 2019, I had the opportunity to share my work with more than six million UK television viewers when the BBC’s Who Do You Think You Are? programme drew on Prison History and my Guide to The Criminal Prisons for an episode with Kate Winslet. Using my research, the producers found information about the actor’s great-great-great-grandfather, one of Dartmoor Prison’s first prison wardens. I also appeared as an expert on the programme.

It was incredibly useful for me in tracking down any additional prison records we hadn’t yet come across and cross-referencing where I had drawn a blank.

Who Do You Think You Are? researcher

I have written two articles for the popular family history publication, Who Do You Think You Are?, including a 'Document Masterclass' on prison registers.The magazine, which has a combined print and online readership of more than 50,000 people, has featured Prison History in additional articles to introduce the website to family historians. In 2021, I appeared on ‘Everything you wanted to know’, a BBC History Extra podcast series, to answer questions submitted by the public on the history of the prison in Britain. More than 60,000 international subscribers downloaded the episode in the first three days.

This was super interesting. Skilfully pulling out great details for a neat discussion on a topic that could have been a full conference. Had not known at all about franchising prisons or profit-driven prisons a few hundred years ago. Rough stuff.

What the 19th-century can teach us about prison education today

If Victorian legislators recognised the benefits of prison education, it only strengthens the case for its continued relevance today. Since 2013, I have used my research to promote the transformative value of education to prisoner’s rehabilitation as an active supporter of the UK’s leading prison education charity, Prisoners’ Education Trust (PET). This charity’s work has made a crucial difference to the lives of more than 40,000 people it has helped to learn in prison since 1989. In 2018, the UK’s Ministry of Justice found prisoners who received PET distance learning grants are, a year after release, 25% less likely to re-offend and 26% more likely to be in employment.

It is important that the public have awareness of the importance and value of prison education and Dr Crone's work has helped engage people through a historical lens. I have found myself drawing on her material in presenting to other general audiences.

During the past few years, I’ve collaborated with PET, former prisoners and prison staff to translate my research into a new, free, and openly accessible course on UK prison education history for learners in prisons and other secure environments, those working within the sector, and the wider public. For the first time, former prisoners have been employed on the course production team and have drawn on their experiences to contribute to the creation of learning resources that will help people for years to come.

Explorations in the History of Prison Education, which will be available on the OU’s free learning platform, OpenLearn, later this year, can be studied as a standalone course or incorporated into modules taught by other providers in secure environments. Crucially, those who decide to register for an Open University qualification can acquire credit for their learning. For many, it will provide an essential first step to formal education.

Written by: Dr Rosalind Crone, Senior Lecturer in History at the Open University.