Why reducing youth violence is a question of public health, not law and order

Our research is pioneering a new public health approach to holistically address youth violence, its deep-rooted causes and its economic and social impact to safeguard children across England and Wales.

Youth violence is a significant issue in England and Wales. Each week it robs parents of their children and leaves deep psychological scars on our young people and communities. According to the Office for National Statistics, knife-related offences have increased rapidly in recent years, from 23,945 in 2014 to 46,348 in 2020. Since 2017, I’ve been working as the lead criminologist for the Youth Violence Commission. One of the Commission’s key findings is that youth violence has cost the English and Welsh economies more than £11bn over the past decade in health care, policing, criminal justice and victims’ services.

We know that this violence is rooted in social deprivation, exclusion and abuse. Yet, we continue to shine the spotlight on the violence committed by young people while downplaying or overlooking the severe violence and mistreatment these very same young people face daily in their own homes and on the streets due to policy and institutional failures. 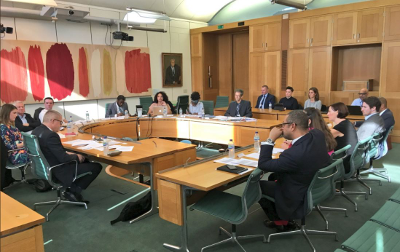 Most public discourse still focuses on treating the symptoms – stricter sentences for offenders and increased policing – rather than the causes. Meanwhile, our politicians have tended to fixate on quick-win short-sighted policies, which place enormous pressure on the services charged with addressing youth violence and, as a result, almost always fail. It doesn’t have to be this way.

We only have to look to our closest neighbours, Scotland, for an example of what we can achieve if we address violence among young people not as something to fix overnight with narrow interventions but a long-term challenge that requires a systematic solution. Formerly among the most violent places in the developed world, since 2005, Scotland, and the City of Glasgow, in particular, have more than halved their murder and violent crime rates by taking a public health approach that effectively treats violence as a curable disease.

My role as lead criminologist for the Youth Violence Commission has involved working with a cross-party group of MPs to identify and promote evidence-based policies to reduce rising rates of knife crime and serious violence between young people. During this time, I’ve collaborated with partners, including economists from The University of Warwick’s Policy Lab in London, to examine the potential benefits and feasibility of taking a similar public health approach to violence reduction in England and Wales. The Commission’s work builds upon three main strands of research:

The Commission’s and my independent research have led to public, private, and third sector policy changes across England and Wales.

Our work on the impact of social media on youth violence persuaded platforms to review their monitoring and safeguarding policies. Senior staff at Google and YouTube invited me to advise them on these issues, with Google ultimately investing £600,000 in the Social Switch Project. The three-strand project included social media safeguarding workshops for more than 500 frontline professionals working with young people, digital sector work experience for over 40 disadvantaged young people and direct funding for grassroots youth organisations.

In 2019, informed by the Youth Violence Commission’s recommendations, the UK Government announced a £35 million programme to create a network of 18 regional Violence Reduction Units across England and Wales. I have also been working closely with a recently established £200 million Youth Endowment Fund to build an evidence-base for effective early interventions and invest in programmes to reduce violence in young people’s lives.

This progress is promising. However, we are still a long way from fundamentally tackling youth violence. In the Youth Violence Commission’s final report, published in July 2020, we called for more long-term investment in Violence Reduction Units to keep young people safe.

The Commission also produced a raft of other evidence-informed policy recommendations, such as:

As we survey the coronavirus pandemic’s lasting social and economic devastation, it is crucial not to overlook its impact on young people. Now more than ever, we must radically increase our investment in long-term preventative strategies that will not only reduce serious youth violence but offer young people hope, security and opportunity for the future.