Day 137, Year of #Mygration: Behind the Tarpaulin 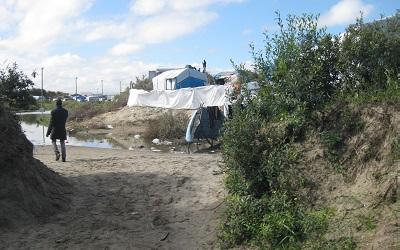 Today's blog comes from OU alumna, Heidi McCafferty. Heidi has worked in Higher Education and International Development since 2012. She previously managed the OU’s Research Network in International Development and Inclusive Innovation, and later worked for Oxford-based NGO, MANGO. In 2016 she founded her own ethical consultancy firm, HM Consulting & Son, which earlier this year successfully bid to manage the OU’s Year of Mygration.

Back in 2015, I spent some time volunteering in what was known as ‘the Jungle’, a large refugee camp in Calais. A former landfill site, the camp lay around three miles from the centre of town and was, at the time, home to an estimated 8000 migrants. It had recently undergone a massive clean-up operation by volunteers, which meant that despite the shocking circumstances in which so many men, women and children were still living, I was greeted with a very different scene to the one I would have witnessed just a few months earlier.

I was volunteering with Help Refugees, whose advice in a text message the day before my departure remains etched in my memory: ‘Be patient, be kind and don’t be a prat.’

My time there took place in the height of summer, and I was volunteering with Help Refugees, whose advice in a text message the day before my departure remains etched in my memory: ‘Be patient, be kind and don’t be a prat.’ This was partly because in the past there had been issues with people failing to coordinate with local groups, showing up unannounced, and then being surprised when their cars were ‘mobbed’. Such incidents, of course, hit the headlines. What didn’t, however, was the five-mile peace walk along the port in Calais in which I took part, when thousands of volunteers, activists and supporters marched in solidarity, side by side with residents of the camp, without a single hint of unrest at any time.

I met some incredible people during my time in the camp, from a bright young Afghan journalist keen to start a new life away from violence and oppression, to groups of young men who had travelled thousands of miles only to be met with four-metre high fences covered in barbed wire. I saw young women and girls, stuck, in limbo, but whose spirit seemed to make their life in the camp appear almost bearable.

Amongst the volunteers, too, I met and spoke to many different people: a Scottish man who’d moved there to live amongst the migrants in order to offer support but who, I could see, was beginning to struggle with the mental toll this was taking; a physiotherapist, who regularly gave up his time to help injured migrants and refugees; and a young English woman who was responsible for organising tents and blankets for the dozens of new arrivals in a certain part of the camp each day. Then there was ‘John’ (not his real name), who travelled over with his partner several times each month and who told me it was ‘the faces you don’t see that you need to worry about’, explaining that the most vulnerable stay behind their tarpaulins.

Most memorably of all, perhaps, I met a woman: a mother, like me, but, unlike me, raising her children in a small tent as she waited for their opportunity to start a new life. We spoke briefly and she asked for a clove of garlic. The controversial collective noun used by the UK’s then Prime Minister, David Cameron, concerning the ‘swarms’ of migrants who, in the words of certain sectors of the press, were looking to buy up all the UK’s properties and bring our NHS to its knees, certainly did not apply to anything I saw and heard. All this lady wanted was to keep her children safe from the war raging in her country – and a clove of garlic. To me, at least, these don’t seem unreasonable demands.

The camp, however, was destroyed by authorities in October 2016, using a combination of cranes and tear gas. I spoke to other volunteers there who told me that the destruction was delayed until the cold weather hit, so that the refugees and migrants who lived there would be ‘too tired to fight it’. I will never forget those words, nor my time in the camp. I experienced life there for just a few short days, before returning to my home, to my son, to my weekly shop and to the British citizenship that is mine purely by chance.

But my passion and determination to fight for the rights of those deemed by all too many as ‘outsiders’ will never cease, and I am delighted at the opportunity to be part of The Open University’s Year of Mygration. Our daily provocations are designed to raise awareness of a range of issues, and to reinforce the social justice mission of the OU. Our series of events have been engaging significant numbers, and helping to amplify the voices of just some of those affected by issues relating to migrants, refugees and those seeking asylum.

I often think about the mother I met in the camp, and about how her experiences could so easily have been mine if it weren’t for the lottery of birth. These people are not numbers. They each have a story, have families, friends, children and pets, and are fleeing environments that are unsafe, violent or ruled by brutal regimes. And during those frustrating moments when I catch sight of yet another tabloid headline, I take a breath and remind myself of the advice I was given: ‘Be patient, be kind and don’t be a prat’.

If, like me, you would define the last part of that message as doing nothing and thereby capitulating to a cruel and unjust system, I see it as my duty to ensure I never do.