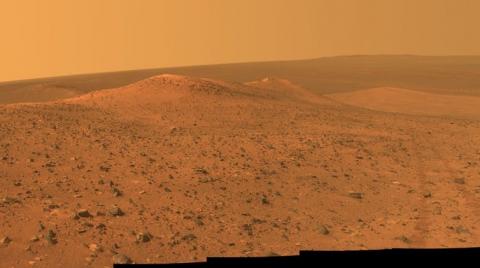 Today Mars has only a thin atmosphere, and its surface is very dry with the possible exception of some localised and temporary water seeps. However, ancient eroded valley networks that were discovered by orbiting spacecraft in the early days of exploration prove that water flowed across the surface in the remote past.

The branching nature of the oldest valleys, which have many tributaries, shows that the water was most likely supplied by rainfall. This means the surface was very likely habitable for life back then.

When clay minerals were detected from orbit and subsequently confirmed by surface rovers, it was taken as further evidence that Mars once had a wet surface environment, hospitable to life. This is because when most rocky minerals weather away under humid conditions they rot to form various kinds of clay. 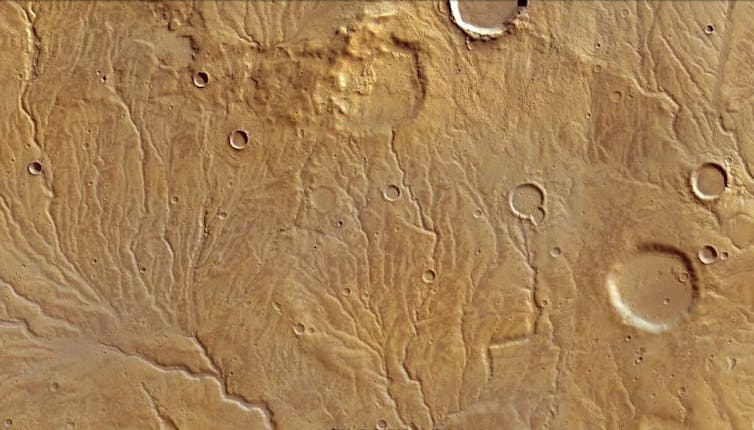 Clay minerals cannot form unless there is water available – it is an essential ingredient in their microscopic crystalline structure. Clays are found virtually nowhere on the red planet except in Mars’s most ancient terrains, dating back to an epoch about 3.7-4.1 billion years ago, called the Noachian.

Understanding these martian clays is difficult, because they can be seen only sparsely across the surface. Some of the detected clays are in bedrock that has been exposed by erosion, others have been washed downstream from such sources by the Noachian rivers.

On Earth, clay forms by weathering of mineral grains chemically attacked by water. Most scientists believe that a similar process took place on Mars during its wet, Noachian period. However, some researchers have suggested that most of the detected clay was not formed in this way at all. They argue instead it formed prior to that, while warm water was circulatingthrough the bedrock in response to nearby volcanic and intrusive activity.

Heat and steam from the magma ocean

Now a new study by a group from Brown University, Rhode Island, published in Nature, further challenges the idea that clay on Mars formed just like that on Earth. The team has done experiments suggesting that the origin of most of Mars’s clays was even earlier. They considered the likely conditions on the hot, infant Mars, 4.5 billion years ago. At that time, the primordial magma ocean that once covered the planet was still cooling, and the first crystals had floated to the surface to grow Mars’s original “primary crust”.

Artist’s impression of very early Mars, with a steamy carbon dioxide-rich atmosphere above the surface of a cooling magma ocean. David A Rothery, Author provided

At this time, Mars very likely had a hot and steamy atmosphere, which was still degassing from inside the planet and had not yet had a chance to escape to space. Conditions would have been perfect to make clays by chemical reactions between the atmosphere and the minerals within the warm and porous top of the crust.

The team suggests that such clay formation would have pervaded a layer up to 10km thick. This, they say, was subsequently buried by material spread across the surface by asteroid impacts and by lava from volcanic eruptions. Surface traces of clay are rare today, because they depend on the buried layer having been re-exposed by later, smaller, impacts or erosional processes that have acted locally to strip away the cover.

The evidence for flowing water in the Noachian is robust, and has not been undermined. However, if the new study is right, Mars may not have experienced a prolonged period when the surface conditions were right for clays to be made by weathering under humid, Earth-like, conditions. 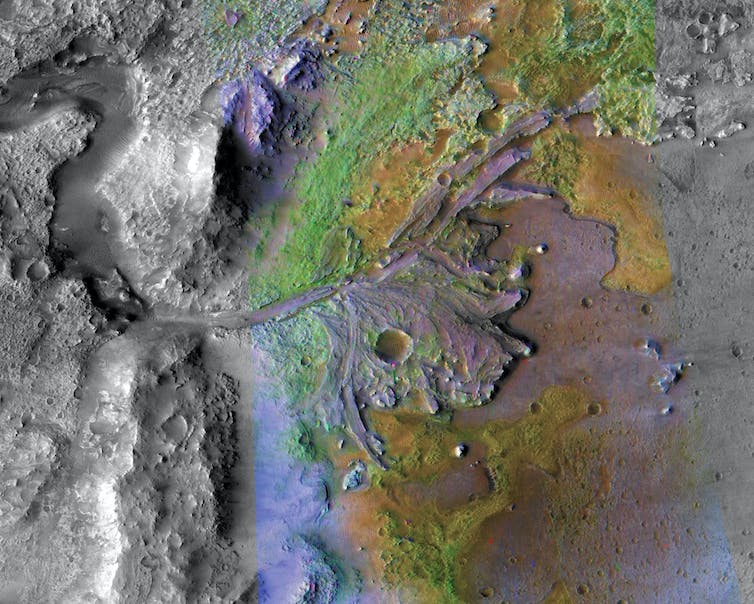 The next Mars landers, NASA’s Mars 2020 and ESA’s ExoMars 2020, are both targeted at sites where clays have been detected. That’s precisely because these may mark sites where Earth-like habitable conditions formerly prevailed, and may have once hosted microbial life just like Earth.

On the balance of probabilities, these are still good places to look for traces of ancient microbial life. The new research suggests ancient life is unlikely to be found where the clays initially formed by chemical reactions with the atmosphere – it doesn’t rule out habitability at the sites where clays have been deposited. Yet, one link in the chain of logic may just have have been at least partially severed.

Open University researcher Dr Gemma Briggs has won an O²RB Excellence in Impact Award 2021, recognising her role in influencing a UK road safety campaign to warn drivers of the dangers of using hands-free ‘phones while on the road.