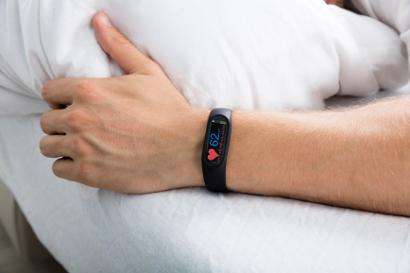 The Digital Health Wearables symposium to be held at The Open University (OU) on 16 January will showcase OU research into the the role of activity monitors in improving the health and wellbeing of people aged over 55 years, of carers, and of people under their care.

At this symposium, Technology Manager at Samsung Electronics, Rohit Ail, will describe how the company changed the design of its Samsung ACTIVAGE app as a result of working with the OU on the Designing Wearable Activity Monitoring Technologies that work well for Older Users and Carers project. The app serves a mobile platform for digital health wearable users to record and monitor their health and share the data with health professionals and carers.

The two-year research programme, funded by the Sir Halley Stewart Trust and via the Economic Social Research Council Impact Acceleration Account award, investigated whether and how wearable activity monitoring technologies can contribute towards supporting active and healthy ageing, in self-monitoring of health, and in caring.

As a result of the research findings and participants’ comments on how they would like the activity monitors and associated apps to be designed, Samsung has redesigned its ACTIVAGE app to strengthen the carer and end-user relationship along with managing the carer health under the same application. These are some of the changes that they have made to the Samsung ACTIVAGE app:

Also as a result of these activity monitors, participants reported a greater awareness of their physical activity, food intake, the need to pace themselves and build in adequate rest times, to diagnose and solve solutions for non-optimal sleep, and they developed a general realisation that activity monitors revealed trends that could be reported to their GPs or carers.

OU project lead, Professor Shailey Minocha said “Up to now, activity monitors were seen as something to be used by younger people and runners. Now, we know that they can be used to benefit older people to measure aspects such as heart rate, physical activity, diet and sleep. Activity monitors can help to optimise physical activity levels to prepare for surgeries and during post-surgery rehabilitation.”

It’s been a great opportunity, I think, for Carers MK and Age UK MK to share our views with the manufacturers. If we hadn’t had this project, there’s no way we would have had that opportunity to do that – to sit around a table with people from these big manufacturers. Our paths would never normally have crossed, so it’s really brought everyone together around the table and it’s been a huge opportunity. I’ve certainly taken stuff away, but, hopefully and crucially, the manufacturers, themselves, will.

I think having the manufacturers involved in this study has been really important when considering impact because a lot of the impact is going to be down to the manufacturers, how they market their products, how they sell their products and how they, themselves, think about their own products. Hopefully, getting them on board, they can see this huge, as it is at the moment, untapped market for this.

I think there’s a huge role for these devices for older people looking after their own health. There’s a greater awareness now of living a healthy lifestyle. We are an ageing population. Older people now are much more savvy with technology than they once were.

The preventive agenda is a driving force at the moment and social isolation a critical factor; it brings on anxiety and depression causing many to contact their health professionals for help.

From the feedback we have received from those taking part in this research it is clear that these devices offer so much more than just a fitness mechanism to prevent frailty; it has motivated people to come together socially, thus negating their isolation and has helped our manufacturer and clinical colleagues to understand the wealth of opportunity in supporting and promoting a wearable device for older persons.

Those taking part in the research are appreciative of the fact that they have been listened to and I am looking forward to a very exciting and creative future in technology for older persons.