Two women and a boy took refuge on the roof … but it was carried away by the deluge of water, and as far as the eye could reach, the three unfortunate persons were seen clinging to the roof. One of the women was afterwards found among the mud of the jökulhlaup [Icelandic term for meltwater flood], but burnt, and as it were parboild; her body was so damaged and tender, but it could scarcely be touched.

This is an eyewitness account of three fatalities during the last eruption (1727) of Iceland’s highest volcano, Öræfajökull. It was a relatively small eruption. The previous eruption in 1362, however, remains Iceland’s largest explosive eruption since the island was settled about 1,100 years ago.

This time, thick deposits of pumice and ash (also known as tephra) covered the volcano, while sailors at the time reported pumice floating “in such masses that ships could hardly make their way through it”. Ash from the 1362 eruption has been found in Greenland and western Europe recently. 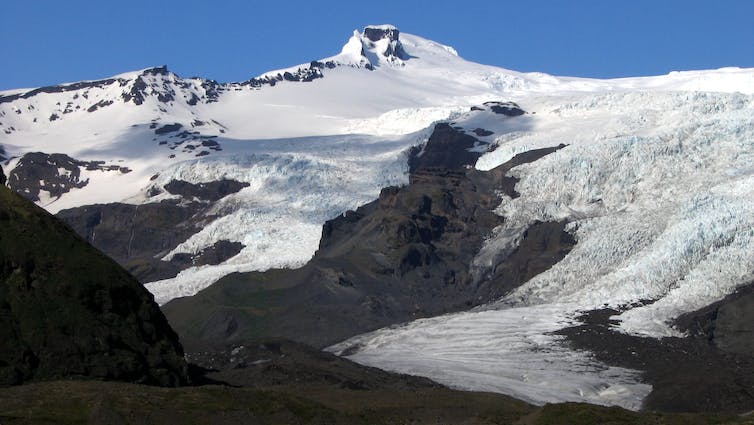 Destructive meltwater floods from both the 1362 and 1727 eruptions travelled down these valley glaciers. Author provided

Since June 2017, there have been “swarms” of small earthquakes in the region. Earthquakes are rare at Öræfajökull, so these have prompted meetings between locals, scientists and civil protection authorities. The unusual activity may indicate a reawakening of Öræfajökull, so it is timely to review previous eruptions and the potential effects of a future eruption.

Towering over 2km above coastal plains, Öræfajökull is a majestic sight. Its upper half is covered in ice that feeds valley glaciers that can be easily accessed. Tourists and filmmakers love it.

We first studied the volcano in 2001-2002. Our two main findings were that it has a variety of eruption styles and a surprising abundance of lavas known as rhyolites. We know that this can erupt very explosively – as it did in 1362. 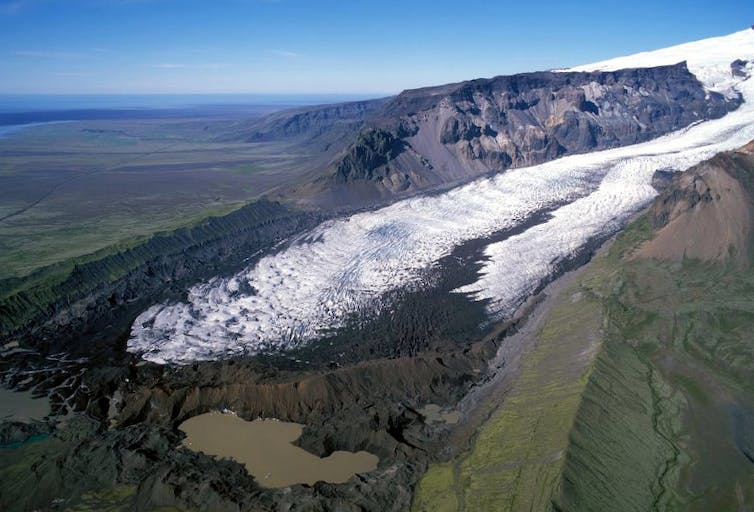 To better understand the 1362 eruption, we have also mapped deposits preserved on the volcano. We found that this explosive eruption was surprisingly variable. It was not just a simple plume that gets gradually weaker, as is common at other volcanoes such as Hekla.

The eruption started by depositing a tephra blanket from a relatively low plume. Next, sticky ash/hail carpeted the volcano. Then the main phase of the eruption began with pyroclastic flows (fast-moving current of hot gas and volcanic matter) racing down the flanks, before a tall plume was established and rained huge pumices down on the land while ash clouds drifted away. As the eruption ended, its explosive energy fluctuated rapidly.

The main implication of our study is that explosive eruptions at Öræfajökull can be complicated. The most powerful phase with the highest plume and widest ash dispersal was probably short-lived (lasting from a few hours to a few days), but there were other stages before and after it with varying degrees of explosivity. 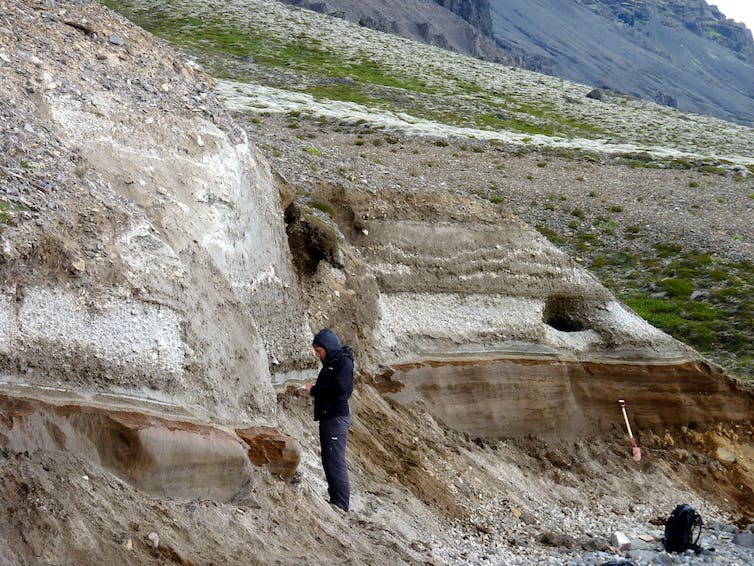 Deposits. The prominent pale grey layer (with a hole on the right) is the first sizeable pyroclastic flow deposit. Author provided

Locally, the eruption was devastating. Rich farmland at the foot of the volcano was covered by thick tephra deposits and swept by pyroclastic flows. The area was abandoned and renamed “Öræfi” (wasteland). Originally called Hnappafellsjökull, the volcano was renamed Öræfajökull.

What of the inhabitants – did they perish or escape? Three crucial pieces of evidence come from excavations of abandoned farms. Buildings had collapsed prior to the tephra fall and, despite evidence of prosperity, virtually nothing valuable was left behind. Also, no corpses were found. Conclusion? Inhabitants of these farms realised they were in danger, packed their belongings, and left. Large earthquakes then destroyed the buildings before the eruption started.

The Icelandic volcano Eyjafjallajökull erupted in 2010, causing a lot of problems to air travel across Europe. Would a repeat of the 1362 eruption cause Eyjafjallajökull 2010-style disruption? No, it would not. 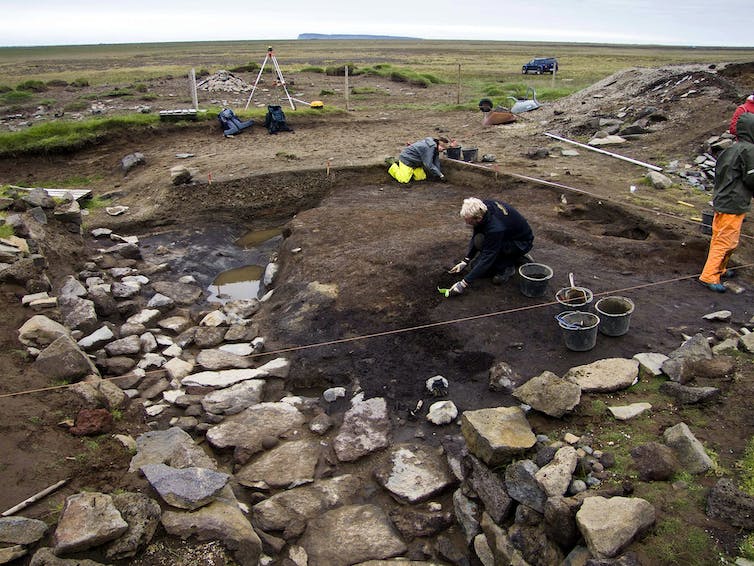 Excavation of farm buildings abandoned immediately prior to the 1362 eruption. Author provided

Eyjafjallajökull caused so much disruption because the eruption lasted for weeks, with the wind often blowing towards Europe, and because aircraft attempted to “avoid all ash”. Since then, improvements to volcanic ash cloud detection and simulation have been made. These, combined with revised procedures at the regulators and airlines, allow planes to fly where low concentrations of ash may be present. For example, the Grímsvötn 2011 eruption, which produced twice as much tephra as the Eyjafjallajökull 2010 eruption in one tenth of the time, caused just 1% of the flight cancellations.

A repeat of the 1362 eruption would disperse ash widely, but our results suggest this stage would be short-lived. This is just one scenario. Others, such as the eruption of lava beneath the ice, may be longer lasting but any disruption would be more localised.

It’s important to be prepared. Any buildings in the paths of floods would be destroyed. There are farming communities in the area but these have learned from the 1727 eruption and have relocated their farms from the glacier outlets. Before the small 1727 eruption there were earthquake shocks that terrified the people, which suggests that big earthquakes might provide warning of the next eruption and allow time for evacuation.

One of the biggest concerns would be the large number of tourists in the area – especially in summer. The nearby visitor centre of Skaftafell is the seventh most popular tourist destination in Iceland. However, Skaftafell lies outside the flood pathways of both the 1362 and 1727 eruptions – and so it is probably safe from floods.

It’s impossible to estimate exactly when Öræfajökull will next erupt. She may just be turning over in her sleep, soon to return to quiet slumber. Icelandic scientists recently installed additional earthquake monitoring equipment: with their acknowledged expertise in eruption monitoring they will provide the best possible information should Öræfajökull fully awaken.