Day 175, Year of #Mygration: 'Ask the Expert' workshop at the Max Planck Institute 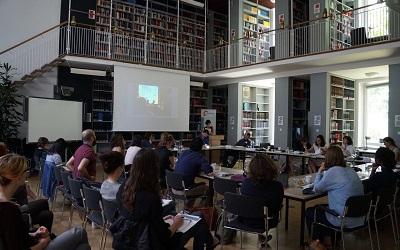 Dr Sharif Haider is a Lecturer in Social Work in the Faculty of Wellbeing, Education and Language Studies at The Open University. Today he talks us through an event he attended at the Max Planck Institute in Germany in June. The event was a 'safe space' for researchers from across Europe to discuss the challenges and opportunities of doing research on migrants while being a migrant.

Even when delegates sat down in an Italian restaurant winding down after a long day's labour at ‘Ask the Expert’ workshop, we were debating the significance of positionality (and lack thereof) in migration research. The Max Planck Institute in Germany organised this event. It was held in Gottingen from 28 to 29 of June 2018. The workshop was a safe space for researchers from across Europe to discuss the challenges and opportunities of doing research on migrants while being a migrant i.e. ‘inside researcher’. While inside, researchers' share cultural, linguistic, ethnic and religious identities with their research participants; it is important for the researcher to be reflective of their position.

In the ‘Ask the Expert’ workshop, 14 powerful papers were presented under five themes from a range of scholars:

The interdisciplinary nature of this workshop explored the roles, perspectives, positionalities of researchers and public figures of migrant backgrounds. All the delegates explained how their identity and position influenced their research and its significance in producing knowledge in neo-liberal and post-migratory Europe. Challenges of being an insider led the discussion beyond ontological and epistemological debates to the fundamental question – research is for whom and why?

Although throughout the workshop delegates engaged in dialogue, discussions and debates regarding a range of issues related to migration, they spent a lot of time discussing and debating the objectivity, accountability, authenticity, and legitimacy of being an ‘insider' in conducting research and generating knowledge.

However, an ‘insider’ status may not always make it possible to cater for differences in relation to gender, religion, regional culture, socio-economic status of researchers and participants. The dichotomy between ‘insiders’ and ‘outsiders’  and ‘subjectivity’ and ‘objectivity’ are complex. Some of the delegates argued for the need to move away from this polarised dichotomy and emphasised the need to be reflective and acknowledge their biases. This in effect means to be open-minded and flexible.

As Nowicka and Ryan suggest, it is important have ‘a starting position of uncertainty, a rejection of groupist assumptions could be fruitful for migration researchers. When no a priori commonalities are presumed, trust and rapport with research participants needs to be achieved in the course of the interview beyond the reference to ethnic, national, linguistic or gendered groups and identities. Starting research with few expectations on the research participant is admittedly a difficult exercise but it also allows us to move beyond the ethnic, or gendered, the lens in migration studies.

This workshop generated a conducive environment where delegates learned from each other via healthy discussions, dialogue, and debates. All the participants enjoyed the two days event. Regardless of their epistemological position they committed to change the migrants’ life through the power of research and activism.