Day 154, Year of #Mygration: Does the US have a legal obligation to accept refugees? 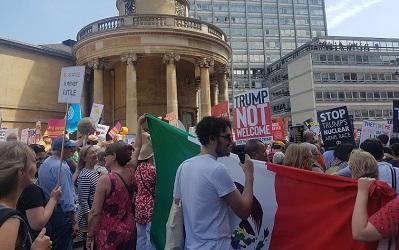 Last week, President Trump tweeted that he would ‘shut government’ if Democrats did not support major changes to immigration laws. Today’s blog looks at an article by Dr Liam Thornton from University College Dublin, which questions the legality of stricter border controls.

If a person arrives on US soil and claims asylum, does the US have to deal with their claim under international law?

The executive order cannot displace domestic legal obligations. So those who, with great difficulty, manage to reach the US will have to have their asylum claims examined. The duty not to return a person to a state where they may face torture or other serious harms is absolute under the UN’s Convention Against Torture. The US has signed and ratified this convention.

However, with the likely increase in asylum detention of people crossing the US-Mexico border that will arise from one of Trump’s earlier executive orders, there is potential for decisions on whether a person is a refugee being made in an exceptionally tight time frame. It’s possible that, more generally, asylum decisions will be rushed through and the law not properly adhered to.

Under international law, can the US ban asylum seekers from certain countries?

Under international law, the US cannot ban asylum seekers from certain countries. The US has signed and ratified a number of international treaties that prohibit religious and race discrimination in the operation of legal systems, and this extends to operating a migration system in line with international non-discrimination protections.

That said, a person cannot claim asylum unless they are on US soil. The executive order will generally suspend issuing visas for 90 days for Iranian, Iraqi, Libyan, Somalian, Sudanese, Syrian and Yemeni citizens under the US visa-waiver programme. An exception for “religious minority” – such as Christians from these countries – appears to be nothing more than a poorly attempted disguise to try to ban Muslims from these countries from reaching US soil.

Refugee arrivals to the US by country of nationality

However, this prevention of safe, legal and accessible routes is not unique to the US. In the European Union, the imposition of visa rules for countries that produce the greatest number of refugees, is precisely what is leading thousands of migrants and refugees to make the perilous Mediterranean crossing. So while you have a right to leave your country, all too often your right to claim asylum in another country can be ignored by states through imposing harsh visa requirements which prevent potential refugees arriving in a country and lodging an asylum claim. For example, a Syrian refugee living in Turkey who is unlikely to get a visa to enter Europe’s Schengen zone, may choose to resort to crossing the Mediterranean in a boat.

Why is the refugee admissions programme being paused?

The US Refugee Admissions Programme (USRAP) deals with people referred from the UNHCR, a US embassy or assigned non-governmental organisations, or a limited direct application scheme. It is open to people who already have refugee status (or would be likely to qualify), who are outside the US, but may wish the US to consider them for entry as a resettled refugee. The US had been due to take in 110,000 refugees under USRAP in 2017, but in the executive order Trump indicates he wants this number to be more than halved to an intake of 50,000 refugees. The executive order calls for USRAP to be paused for all refugee applicants for a period of 120 days. The reason Trump offers for this suspension is to ensure the already complex vetting processes are strengthened.

Yet, an exceptionally concerning aspect of the executive order is to exclude Syrian refugees from being resettled in the US under USRAP. This exclusion is to remain in place until such time as Trump has determined that entry of Syrian refugees aligns “with the national interest”. Trump has proposed that “safe zones” are to be planned for refugees within Syria as a result of the Syrian citizen exclusion from USRAP.

How many asylum seekers are we talking about?

From 2013 to 2015, only 1,823 Syrian refugees were accepted under USRAP. Therefore, Syrian refugees constituted an exceptionally small number of the almost 210,000 refugees accepted for resettlement in the US between 2013 and 2015. Outside of USRAP, the number of individual Syrians claiming asylum on the territory of the US between 2013 and 2015 was exceptionally low. This is because visa laws already in place manage to deflect most Syrian asylum applicants from ever reaching the US. The proposed visa prohibition will mean the numbers of Syrians claiming asylum at US borders will decrease.

However, a country as powerful as the US can easily set aside international legal obligations to which they had previously adhered. So I would be surprised to see any “punishment” from the international community. If the international community is genuinely outraged by this decision, other countries need to start planning to increase their own refugee resettlement programmes, along with ensuring safe, legal and accessible routes of entry for those seeking sanctuary. But, given the current political climate in Europe, Australia and elsewhere, I’d expect a rather muted response to the executive order.

This article, with full citations, was originally published last year in The Conversation.