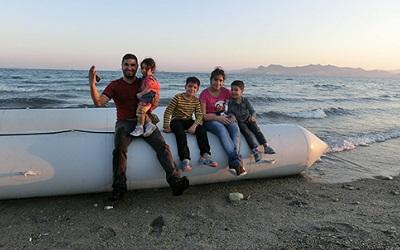 Yesterday, a High Court ruling stated that the Home Office had given it misleading information that resulted in the claims of over 500 unaccompanied children seeking asylum in the UK being rejected, preventing them from rejoining with their families. Today, we look back at an article written by Dr Naomi Holford, a Lecturer in Childhood and Youth Studies in The Open University’s Faculty of Wellbeing, Education and Language Studies. Dr Holford considers the issues and impacts faced by displaced children caught in crisis.

We have seen unprecedented numbers of refugees crossing borders over the last few years - what is life like for the children and young people making this journey?

The human crisis of forced migration is one of the greatest political and social issues of our time. The effects of war, poverty and climate change have led millions of people across the world to flee their homes, in search of a safer, better life elsewhere: 65.3 million people are displaced from home today (UNHCR).

Developing countries in fact host 80% of the world’s refugees. Political debate and media coverage, however, focus overwhelmingly on the ways in which migration affects the richer, developed countries. The past few years have seen increasing numbers of refugees trying to reach Europe by sea: journeys that are difficult and dangerous, and often result in death. The official response to this situation has been ambivalent; the EU and countries within it are juggling a political desire to decrease immigration with a humanitarian impulse to save lives, resulting in varying reactions. So, for instance, at the beginning of 2015 the EU's focus was firmly on repelling boats and ships carrying migrants from reaching its borders. Rescue operations were discouraged, the argument being that they encouraged people to attempt the crossing. This, of course, meant a greater danger at sea, and after a shipwreck in April 2015 caused 900 deaths, the EU softened its policy and put more resources into rescue efforts. Conditions when those refugees who do manage the crossing arrive, though, are deeply inadequate.

The shipwrecks and deaths in 2015 led to a brief shift in public opinion around migration in the UK and across Europe. British newspapers which are routinely hostile to immigration depicted the deaths at sea as a humanitarian tragedy (although this sympathy was short-lived). Much of this public feeling came to centre around a widely-circulated photograph of a three-year-old Syrian boy, Alan Kurdi, washed up dead on a beach in Turkey. He was one of sixteen people in a rubber boat designed for eight; his older brother and mother also drowned. The widespread shock and outrage over the image was an example of the ways that children's suffering (and the power of a single image) can move us to think about the human toll of international crises and our political policies.

But although we may have found sympathy for this young boy, and demanded something be done, the reality of life for young refugees remains extremely hard. Like Alan Kurdi, many children and young people make the journey with their family. But others arrive unaccompanied, either because they set out on their journeys alone, or because they were separated from their companions along the way. More than 3000 children and young people come to the UK seeking asylum per year. International law on children's rights means that child refugees, especially unaccompanied children, ought to have better guarantees of protection, but in practice resources are often limited.

For older children - teenagers and young people moving into adulthood - some new problems arise. They are less likely to garner sympathy: while young children may be viewed as innocent victims, teenagers are more likely to be perceived as troublesome. Border agencies and immigration officials spend a great deal of time trying to assess the age of unaccompanied minors, as children (under the age of 18) require more protection under international law. Unaccompanied migrants often lack identification, or may have false identification, so authorities assess the age of young people based on their "appearance" and "demeanour". These practices differ in different places, but often begin from a place of distrust, assuming anyone visibly over the age of puberty might well be an adult.

Those who are judged to be over 18 will lose the support and advice provided to child refugees: for instance, the UK requirement that children are cared for by the local authority. Instead, they are placed in unsuitable accommodation with adults, or taken to immigration removal centres - although children have since 2014 officially no longer been subject to immigration detention.

Immigration removal centres are used in many countries, including Britain, to detain asylum seekers whose claims have been denied, or have not yet been accepted. The ultimate aim is usually to deport people back to their country of origin, but this is often not possible for various reasons (such as the country of origin refusing to accept those who have fled). So detainees can be indefinitely imprisoned. Research into conditions within these detention centres has highlighted the poor conditions, with complaints of sexual abuse, fights, and inmates working for extremely low or no wages, and the despair and uncertainty felt by detainees.

Research into conditions within these detention centres has highlighted the poor conditions, with complaints of sexual abuse, fights, and inmates working for extremely low or no wages, and the despair and uncertainty felt by detainees.

Even for young refugees whose age is not officially disputed, turning 18 can come as a difficult milestone. The rights they are afforded as children, such as accommodation by the local authority or leave to remain in the UK, come abruptly to an end. So young people may find themselves evicted from their homes, deported, detained, or sent to another part of the country. Their experience highlights the significance of a legal dividing line between childhood and adulthood in affecting young people's experiences and the way they are treated.

The experiences of young migrants puts a spotlight on the transitional nature of this time of life: not quite children, not quite yet adults. Those young people who make dangerous journeys alone may need to adopt a more independent, adult way of life in order to navigate the obstacles they face on the way. Yet this may result in them being judged as adults when they reach safety, and denied the legal rights we afford children based on their biological age.

This article was originally published on 12 September 2016 on Open Learn.