Day 178, Year of #Mygration: Milton Keynes Hindu Association marks one of the largest religious festivals in the world 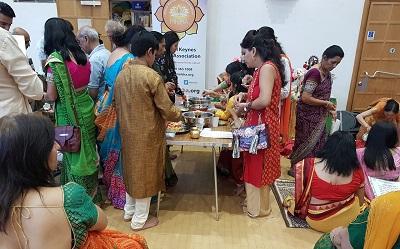 Today we highlight one of the world's largest religious festivals, celebrated by nine hundred and thirty million people around the world, Krishna Janmashtami.

The Hindu Festival marks the birthday of Krishna, eighth avatar (incarnation) of Vishnu (Preserver of the Hindu Trinity, that includes Brahma and Shivu). The Festival was celebrated for two days across the world earlier this month, including in Milton Keynes, home of The Open University. Jiten Patel, Head of Equality, Diversity and Inclusion and Dr Fidele Mutwarasibo, Visiting Research Fellow in the OU's Faculty of Business and Law, attended the Festival hosted by the Milton Keynes Hindu Association.

Where Vaishnava temples exist, festivities begin before dawn and extend all day until midnight, the exact moment of the anniversary of Krishna’s appearance. Events include kirtan, singing the Lord’s name along with other devotees; and japa, private, more intimate prayer. Some devotees cook a feast of over one hundred dishes, while others perform drama and dance. Some clothe and decorate the deity of Krishna while others string enormous flower garlands and other decorations for the temple. Incense burns, scriptures are read, and all but the young and the infirm fast all day. The deities are also bathed with a variety of auspicious liquids in a kind of ablution ceremony called abhisheka. Sometimes taking over two hours, this is performed with great pomp.

Finally, at midnight, priests pull apart the curtains to reveal the freshly dressed deity of Krishna on a creatively festooned and colored altar. The excitement builds, and a rousing kirtan ensues.

Find out more about major religious festivals and rituals, including how thousands of Malaysian pilgrims show their extreme devotion to the Hindu god of war, by watching the latest Open University/BBC co-production, 'Extraordinary Rituals', available now on the BBC iPlayer.

See the free OpenLearn materials that accompany the series