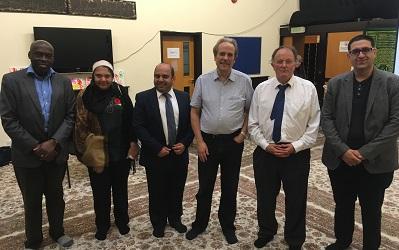 Dr Fidèle Mutwarasibo, Visiting Research Fellow at The Open University, is a vastly experienced local community activist and leader of Milton Keynes’ Fight Against Hate Campaign. Fidèle is a lead consultant on the OU’s Year of Mygration and has worked in the voluntary sector for over 25 years. His experience includes working in community development, emergency and relief, research, community engagement, equality and anti-discrimination, fundraising, programme management, and policy and advocacy.

Today, we highlight a methodology known as 'Weaving Trust', launched in 2015, following a fire bomb attack on Granby Mosque, Milton Keynes, in 2013. A range of institutions now regularly meet, to explore how to tackle hate crime and boost social cohesion and integration within the city.

'Weaving Trust' is headed by Alan Bainbridge, and brings together representatives from a range of faiths, to talk about their experiences of living in Milton Keynes. The methodology then sees six-minute conversations take place between attendees who talk about their own lives and experiences with another participant they have not met before. Participants are then given a short period of quiet reflection where they are asked to text some of their own insights, foresights, celebrations and concerns to a central number. After a short break, those texts are then shared, alongside a broader reflection of life in Milton Keynes. The organisers hope to see 1000 'Weaving Trust' conversations taking place each year.

If you would like to find out more about the methodology, the Quaker centre in Milton Keynes will be hosting taster sessions as part of their open day on 8 September 12.00 – 16:00. Over the coming days, we will highlight some of the key insights that have come out of these events. Today, we feature insights by a Muslim member of the community.

I want to tell you a little story. It’s a story about migration.

At one of the annual pilgrimage the Prophet Muhammad, Peace Be Upon Him (PBUH), met six men from Yathrib (Yathrib was the Jewish name for Medina) and spoke to them about Islam reciting portions of the Quran. The six men accepted Islam, five of them returning the following year bringing seven more who also accepted the Prophet’s message. In the third year even more people came from Yathrib accepting the message of Islam. They pledged to support him and invited him to come to Yathrib as an arbitrator to reconcile among the hostile tribes.

Faced with persecution from the Makkhan Arabs, the Prophet (PBUH) migrated to Yathrib with his friend Abu Bakr. The people of Yathrib welcomed the Prophet (PBUH) and chose him as their leader not only because he was a neutral new comer but because he was of a good character - gentle in composure, merciful in character, beautiful in manners, elegant in speech and most compassionate and forgiving.

Under the Prophet’s (PBUH) leadership, the tribes of Yathrib agreed a charter to work together for the betterment of their community providing protection to each other. The Prophet (PBUH) built the first mosque in Yathrib which was a community centre and open to everyone men, women, Muslim and non Muslims.

Like Milton Keynes Yathrib was an oasis, a fertile land of about twenty square miles which was surrounded by volcanic hills, rocks an uncultivated stony ground. It was not a commercial centre but an agricultural settlement in which the various tribal groups comprising Jews, Christians and Pagan Arabs lived ‘cheek by jowl in a state of deadly hostility in their hamlets and farms’ until the Charter which ensured peaceful co-existence of the diverse communities within Yathrib.

Regardless of who we are and what we believe in, we have this unique ability to come together to celebrate the things that we have in common. We have all come from somewhere and made Milton Keynes our home. It’s a city which has allowed me to be myself – a Muslim, British woman who misses waking up to her cup of English Breakfast Tea when away from home!

I pray Allah guides us to be the best of people, loving, caring and respecting each other.