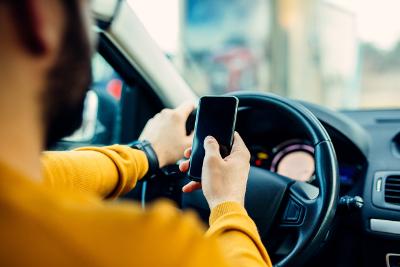 An OU academic has fed her research into a campaign on the dangers of mobile phone use while driving, which begins this week (9 March 2020).

Dr Gemma Briggs, Senior Lecturer in Psychology in the OU’s Faculty of Arts and Social Sciences, worked with Dr Helen Wells, Senior Lecturer in Criminology, from Keele University’s School of Social, Political and Global Studies, on a toolkit, funded by the Road Safety Trust, which will be provided to all 43 UK police forces and partner organisations as part of the National Police Chief's Council’s (NPCC) ‘Fatal 4’ campaign.

The resources, which include 60 ‘drag and drop’ tweets with the campaign hashtag #StandingUpForHangingUp, and a set of Frequently Asked Questions for police officers, are designed to help police with enforcement, making confident charging decisions, and to provide guidance around communications work.

Dr Briggs said: “The work we have done to support the NPCC mobile phone enforcement campaign is centred on specific explanations for why phone use by drivers is dangerous, rather than simply telling drivers that they shouldn’t be doing it.

“We have taken an evidence-based approach to answering commonly asked questions about phone use by drivers, along with the objections that some people have to evidence which shows that handsfree phone use offers no safety benefit over handheld use. The hope is that by sharing clear evidence for the dangers of distracted driving we can encourage behaviour change, leading to fewer drivers using their phones behind the wheel.”

Dr Briggs’ research has had significant impacts on policy which include:

Find out if you are a focused driver using our interactive

Read more about the impacts in: Revealing the dangers of hands-free phone use