Space rocks expected in 2023 from NASA mission to Bennu 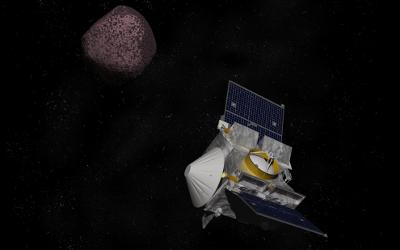 An OU researcher is collaborating on a mission which will bring back new space rocks to Earth.

Dr Ben Rozitis, Post-Doctoral Research Associate at the OU and a collaborator on the Origins, Spectral Interpretation, Resource Identification, and Security–Regolith Explorer (OSIRIS-Rex) mission, claims that it will return with a large collection of space rocks not currently represented in existing collections on Earth.

Launched in 2016, this NASA asteroid study and sample-return mission successfully attempted its first sample collection on 20 October 2020 and is now on course to bring back new space rocks to Earth in 2023.

“The samples returned by OSIRIS-REx will be the largest by mass since those collected by the Apollo astronauts on the Moon’s surface. It will give us the opportunity to directly study Bennu’s unusual rocks in the laboratory, and thereby help us understand how the Solar System formed and evolved.”

The findings, published in the paper: Asteroid (101955) Bennu’s weak boulders and thermally anomalous equator in the journal Science Advances, suggest that the rocks on Bennu are very weak, which has important implications for the study and interpretation of meteorite collections on Earth. Meteorites are chunks of asteroid that have fallen to Earth and provide insight about the formation of the Solar System and how it evolved.

Opportunity to investigate how planets are formed

On 20 October, the uncrewed spacecraft touched down in the northern hemisphere of Bennu for a few seconds to collect a sample of the asteroid’s rocks and dust. The mission will help scientists to investigate how planets are formed and how life began, as well as improve our understanding of asteroids that could impact Earth.

Dr Rozitis will now review the temperature data to determine how the sampling attempt has altered the surface of Bennu at the sample site.

Find out more about OU research in space science