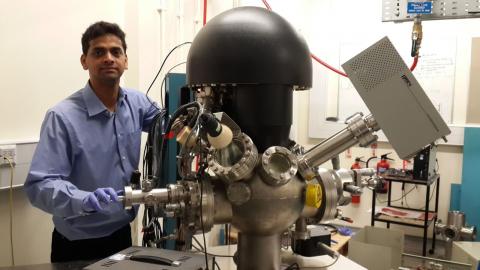 An OU academic has been named as a top contender for the Best in Science and Technology in The British Indian Awards 2017 to be announced on Wednesday 14 June.

Dr Satheesh Krishnamurthy, OU Senior Lecturer in Energy, and a Fellow of Royal Society of Chemistry at School of Engineering and Innovation is among the list of finalists for The British Indian Awards which recognise and commend the efforts, determination and hard work of the British Indian community and businesses and their significant contributions to a diverse range of industries in Britain.

Dr Krishnamurthy is very active in UK/India collaborations and in celebrating young academics. He is Vice-president for the Indian Chamber of Youth Entrepreneurs. He was awarded the Mobility Award at the India-UK Research Excellence Awards in 2016. His project to develop low-cost solar cells involved a researcher exchange programme, which has fostered the skills of young academics working in this field. He was also awarded Global Initiative Academic Network, by Ministry of Human Resource Development in India to teach in higher academic institutions in India.

He is also one of the top 30 EU scientist and Engineers to represent in Frontiers of Engineering meeting in the USA.

His research into solar energy has resulted in him being awarded a number of grants from the Royal Academy of Engineering, British Council, Tata and UK Enterprises, one for remote solar labs and another to develop self-cleaning materials for solar cells.

Commenting on being a top contender for The British Indian Awards 2017, Dr Krishnamurthy said: “I am really humbled to be a finalist for this prestigious award. My research group mission is to develop socially-oriented research that has direct benefit to society. We are working on that mission and these awards will be a huge catalyst and encouragement to our vision. I am also pleased to be a finalist along with several high profile knighthood leaders from Cambridge, Kings College London and other high profile entrepreneurs.”

Find out about The British Indian Awards 2017.

Read more about the new awards awarded by the Royal Academy of Engineering for solar energy.