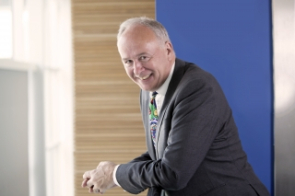 Simon Lee became Professor of Law at the Open University in December 2015. He also served as Director of Citizenship & Governance Research in 2016, 2017 and 2018. He is Emeritus Professor of Jurisprudence, Queen’s University, Belfast. He was a Brackenbury Scholar at Balliol College, Oxford (1976-1979) and a Harkness Fellow at Yale Law School (1979-1980). After being a lecturer in law at Trinity College, Oxford, and King’s College London, he became professor of jurisprudence at Queen’s (1999-2005) and served as the dean of the faculty of law. He was then Rector & Chief Executive of Liverpool Hope University College (1995-2003) and Vice-Chancellor of Leeds Metropolitan University (2003-2009), both institutions winning various awards during his leadership. He founded Level Partnerships in 2009 and chaired it until 2014 when he became Executive Director of the Cambridge Theological Federation. He became a Fellow of St Edmund's College, Cambridge, in 2015. He was awarded honorary doctorates by Virginia Theological Seminary in 2011 and Liverpool Hope in January 2016.

His contributions to the peace process in Northern Ireland included being the co-founder of Initiative ’92, which established the Opsahl Commission. He was appointed by different governments to the Standing Advisory Commission on Human Rights in Northern Ireland (1992-6), to the Standards Task Force on schools (1997-2001) and to chair the Independent Monitoring Board for the Liverpool Education Authority (1999-2000). He chaired the board of the Playhouse and Everyman Theatres in Liverpool. He then chaired the professional rugby union club, Leeds Carnegie, with first Stuart Lancaster and then Neil Back as head coach. In 2010 he became the inaugural chair of the John Paul II Foundation for Sport, which was launched by Pope Benedict XVI.

[E3] - Astrobiology at The Open University