LGBTQ+ Lives and the Women’s Prison 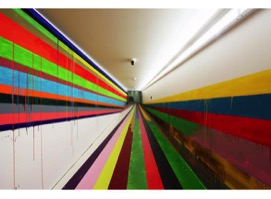 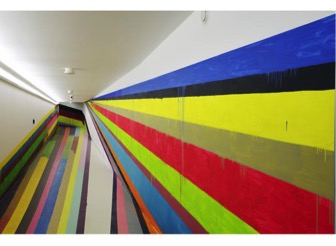 Images show the visitors’ tunnel at the Justiz Vollzugs Anstalt (Prison) in Düsseldorf, Germany, with mural by Markus Linnenbrink

It is almost impossible to imagine a depiction of life in a women’s prison that doesn’t touch on same-sex sexuality. From TV dramas, to pulp fiction and B movies, lesbian characters and prisoners who are ‘jail bent’ or ‘gay for the stay’ are staples of the genre. For long periods of time, the fascination with sexual and romantic relationships in women’s prisons has been shared by academic researchers – psychologists and sociologists describing life in women’s prisons. For the most part, however, the relationships that have been described by researchers have overwhelmingly been those between women who identify as heterosexual, and who only have relationships with other women while in prison. The voices and experiences of those who identify as lesbian/gay, bisexual, trans*, queer or intersex are almost completely missing, despite evidence to suggest that LGBTQ+ women may be more likely to be sentenced to prison than other women, and despite the significant numbers of LGBTQ+ women working as prison officers in English prisons.

In recent years, LGBTQ+ women have become increasingly visible in popular representations of prison life, such as Pat Arrowsmith’s 1970 novel Somewhere Like This, ITV’s Bad Girls (1999-2006), and the current Netflix series Orange is the New Black (2013-2016), and more likely to be portrayed positively. However, almost no academic research has been done that pays attention to the presence of LGBTQ+ prisoners and staff in women’s prisons in England, or that tries to understand what might be distinctive about their life experiences and perceptions of prison life.

This study is interested in the stories of LGBTQ+ lives contained in women’s prisons in England. Ex-prisoners and current or former prison officers who identify as lesbian or gay, bisexual, trans*, queer or intersex, are invited to take part in in-depth life history interviews in order to shed light on this neglected aspect of the criminal justice system. Participants in the research will be invited to talk freely about their life stories, making it possible to develop a rich picture of their lives both inside and outside the prison. The insights gained from participants’ stories will make a contribution to knowledge in criminology, social history and cultural studies. Wherever possible, relevant findings will be shared with campaigning organisations and policymakers to try and improve the understanding of, and provision for, LGBTQ+ people in the criminal justice system.

This research study has been developed over several years by Dr Abigail Rowe, a Lecturer in Criminology at The Open University. Abi has experience of carrying out research in open and closed women’s prisons in England, and has spent time with and interviewed many prisoners and prison officers about their experiences of prison life. Her writing about women’s prisons explores themes of power and resistance, identity, coping, and how staff and prisoners manage their everyday lives in the complex social environment of the prison. As a gay woman herself, she became interested in the life stories of LGBTQ+ prisoners and prison officers while carrying out extended periods of fieldwork in women’s prisons. Alongside this project, Abi is currently also involved in another research project with Open University colleagues about the experiences of trans* prisoners in men’s prisons. You can read more about her past and current research, and access her publications here.

If you identify as lesbian/gay, bisexual, trans*, queer or intersex, and have served a prison sentence in a women’s prison in England, or worked in a women’s prison as a prison officer, then this research project is interested in your story. If you think you might like to talk anonymously and confidentially to a researcher about your life experiences, please consider getting in touch.

What will participation involve?

Each participant in the study will be invited to take part in two in-depth, ‘life story’ interviews with Abigail Rowe.

The research method is designed to ensure that participants are able to talk about the things that they see as being most important about their own lives, rather than the researcher deciding in advance what the interview will focus on. Each interview is likely to last for between one and three hours (depending on how much the participant wants to say), and will be arranged for a time and place convenient to the participant. Participants will be asked a small number of open-ended questions about their lives and will not be required to discuss anything they don’t wish to. With participants’ consent, interviews will be audio-recorded to ensure that an accurate record of the interview is produced. The audio recordings will then be transcribed and analysed to identify important themes, ideas and phenomena in the data.

The design of this project has been rigorously examined by the Open University’s Human Research Ethics Committee (HREC) to ensure that it will be carried out to the highest ethical standards. All participation in the research will be anonymous and confidential, and participants will be able to change their minds about taking part at any time, without needing to give an explanation. More information about how confidentiality will be ensured can be found here.

If you would like further information, and/or are interested in participating in the research, please get in touch.