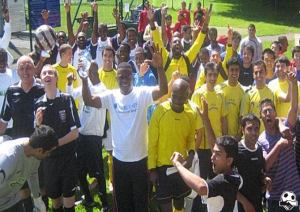 Sport has enormous economic, social and cultural significance as a global phenomenon in which the media plays no small part. The researchers on the theme, David Goldblatt, James Wyllie and Kath Woodward, have explored the distinctive part played by the BBC World Service (BBCWS) in representing and mediating sport across the globe.

Our aims have been to capture what is particular about the BBCWS's coverage of sport, and to use this research as a prism through which to explore the social significance of sport as mediated by a public broadcast service with the remit of diasporic communication. The service has been transformed in its coverage and is also transforming in the opportunities it affords for the democratic and diverse coverage of sport across diasporas, as a contact zone in which new identities are forged.

The BBCWS has played a key role in defining sport and sporting identifications. This theme has examined the transformation of the service from the voice of empire, to that of a responsive 21st century broadcaster that acts as a contact zone for diasporic communities in a changing social and political terrain, both within the UK and across the globe. Sports Across Diaspora has interrogated the relevance of impartiality and objectivity upon which the service was founded and the different ways in which this has played out in sport, which from the early days of the BBCWS has been constitutive of national, transnational and community identifications; from the cyclical reassertions of colonial Britishness to re-articulations in a global arena of changing power geometries. Sport defines the rules of engagement that multiple diasporas abide by and re-construct. Cricket is a particular and appropriate example of geographical shifts which also involve new ideas about sport as entertainment including a re-configuration of some of the rules and regulations.

Our approaches have included archive research at the BBC Archives at Caversham and the BBC Sound Archive; interviews with producers, sports presenters and journalists at Bush House; as well as participating in the making of World Service programmes ourselves. We have developed a theoretical approach which brings together the dynamic of embodied sporting practices, and the performances of broadcasting which has its own regulatory role.

Sport on the BBCWS presents a very particular research site which brings together the contradictions of cosmopolitan, national and international identifications and the materialities of technological transformation and regulatory bodies of sport, including the media, and embodied sporting practices. Our research has demonstrated the relevance of sport and sports broadcasting as affects of changing global politics but also as having affects, some of which are democratising in the making of new diasporic communities.

Tuning In at the BBC World Service