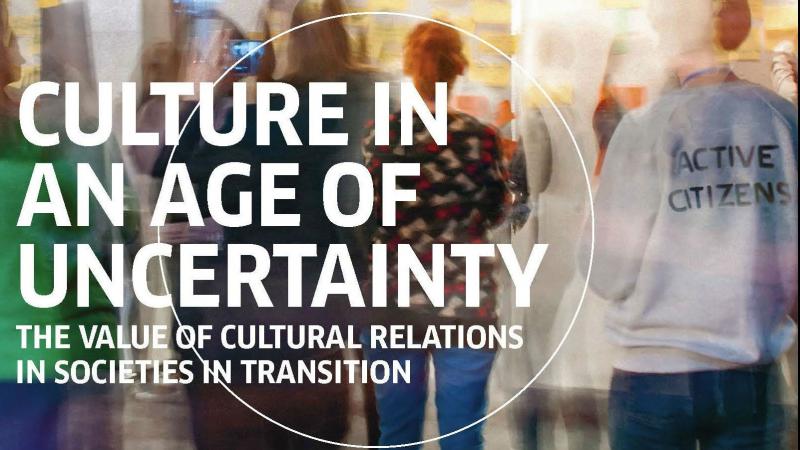 Culture in an Age of Uncertainty. Active Citizens in Ukraine. Photo by Oleksandr Filonenko © Goethe-Institut, adapted from the original.

The Cultural Value Project: Cultural Relations in 'Societies in Transition’ (2017-2018) is a collaboration between the Open University and The Hertie School of Governance, commissioned by the British Council and the Goethe-Institut. The Cultural Value Project (CVP) project explores the different features of the UK and Germany’s approaches to cultural relations. The CVP contributes to a better understanding of the nature and value of such activities in terms of their ability to make a difference – in particular to supporting stability and prosperity and to strengthening civil society in societies going through substantial change.

Culture has the capacity to build bridges of communication and understanding between peoples and countries especially in contexts of conflict. But whether and how and under what conditions it does so remain elusive.

Our report sheds light on these important questions at a time when the UK takes an insular turn as it negotiates Brexit, and when budgets for international collaborations are being reduced and the very rationale for the kind of cultural cooperation that the British Council has fostered over eight decades is being challenged. It might be wise to recall that the initial impetus behind setting up the British Council was to promote friendship between peoples. Friendly cultural exchange and collaboration remain a vital dimensions of UK diplomacy.

A systematic and structured approach to assessing value can help organisations remain vigilant that their networks do not become sclerotic and that the main beneficiaries of cultural relations are not the ‘usual suspects.’  It is better that international dialogue is maintained through cultural exchange – with words not bullets – that is what is at stake.

The study provides evidence that cultural relations do generate value for all stakeholders involved in the foreign cultural relations organizations activities. It also sheds light on the conditions that would be favourable to reducing conflict, to training and promoting cultural brokers, to identifying and building future leaders, and to strengthening civil society.

We know from Fawlty Towers that cultural relations is a difficult diplomatic dance; we can easily offend and be offended. This is a time when Britain's "soft power" is already under pressure with Brexit and our negotiating team often seems to hit a brick wall in Brussels. But Britain's relations are much wider. Our new research shows in fact that, below the radar, Britain's cultural relations teams overseas are putting in the hard work of listening, debating and helping people in other cultures build their societies.

This work is invisible to anyone living in Britain and our cultural ambassadors rarely get any credit. But the relationships cemented through cultural encounters allows people from different cultures to build trust and see from each other's perspectives. It creates affection.

Our research shows that the British Council and Goethe Institute do valuable work making cultural exchanges happen in tiring, political and often even dangerous circumstances. The benefits will last for generations.

While the role of foreign cultural institutes is to promote intercultural dialogue and exchange, in ‘societies in transition’ they often have an important role in mediating relationships between conflicted local cultural actors or regions, often walking a tight-rope between visibility and invisibility to avoid confrontations with authorities or upsetting sensibilities. The very presence of cultural relations in ‘societies in transition’ like Egypt and Ukraine is symbolically significant, because they offer a measure of security in that they can ‘bear witness’ to the work of independent and activist artists and organisations; and because they create spaces of relative autonomy shielding cultural actors.

Local brokers can be cultivated as trusted partners in conflict resolution that require local know-how. Our research suggests that cultural relations can help reduce conflict and strengthen civil society when local cultural brokers have the neccessary skills and support. The work of local cultural brokers in these contexts often poses personal security threats.

One of our main findings is that local cultural brokers create value and play a key role in managing various trade-offs and tensions: mediating social relations via their multilingual skills; brokering arrangements and agreements with different parties; exchanging knowledge and know-how; training peers in skills; and introducing technological innovation. In doing so, they build on and enhance their cultural and social capital, while contributing to a dialogue of cultures.

Local cultural brokers are essential to good cultural relations, but their work mostly remains invisible to the public at home.

Cultural relations can help strengthen civil society by promoting the development of the independent cultural sector and civil society through projects that offer funding, training, skills and opportunities otherwise not available locally.

However, the was some evidence of perceived exclusivity in terms of location, partners and types of beneficiaries in some projects. Even if the perception on the part of some stakeholders is specific to our research, it signals a potential image problem that could hinder the success of cultural relations activities more broadly.

For example, cross-generational dynamics in ‘societies in transition’ can hinder effective cooperation. Too much focus on youth in projects aimed at cultivating future leaders can create tensions with older generations who see themselves as equally capable of being future leaders.

Both Ukrainian and foreign cultural entrepreneurs underestimate the cultural sector in Ukraine. Contrary to misconceptions, our research shows that there have been significant developments in the cultural sector and in cultural relations in the last decade plus. This  includes the rise of independent and government funded initiatives like: Mystetskyi Arsenal, Izolatsiya, Pinchuk Art Center, Dovzhenko Center, Dzyga, Ukraine Crisis Media Center, Institut Knyhy, and Ukrianian Institute, among others.

While emphasis on youth as future leaders in cultural relations is laudable and should continue, our research also shows that certain groups, like ‘easterners’ and ‘older generations,’ feel left out and not listened to by younger activists. Good cultural relations require a broader understanding of inclusivity - specifically in times of conflict and when the stated aim of cultural actives includes the development pathways to peace.

Users highlighted that cultural entrepreneurs do not do enough to consider who their intended audiences are and they want. The use of new media and online projects (like virtual museums and social media platforms) can be simultaneously highly innovative whilst also miss the mark as to what intended audiences would like to see and/or how they would like to engage in/with cultural projects.

The complex and nuanced nature of cultural relations suggests that attempts to evaluate them will themselves have to be sophisticated, nuanced, and sensitive to the different contexts in which they are taking place and different actors involved. One of the most important findings coming out of our review of existing literature and our research is that cultural relations organisations need to understand the local context in which they are operating in order to engage in a dialogue based on mutuality.

It is important to situate the strategies and practices of cultural relations organisations like the Goethe-Institut and British Council within the wider histories of their countries to understand their distinctive approaches. German cultural relations are founded on a ‘strong’ conception of culture (where culture is closely tied to national history, language and identity). In contrast, British cultural relations are based on a ‘weak’ conception of culture, emerging from a tradition of liberal individualism and British empiricism. Germany and the UK have very similar goals in deploying culture relations to assist societies in transition. But they have different modi operandi.

The British Council in Egypt has developed an approach to soft power that Is more likely to have a large scale impact through education and operates top-down. BC's  approach focuses on social issues like education that are not too ideologically sensitive (unlike youth empowerment, freedom of expression, or pluralism).

Alternatively, Goethe-Institut focuses on qualitative (small-scale) civil society empowerment, which limits its impact to a community of civil society actors that already speaks foreign languages, is already creative, innovative and seeking for politically engaged forms of cultural and artistic expressions. The target audience of GI does not need training. They need funding and opportunities to collaborate within the MENA region and beyond.

The Open University adapted the Cultural Value Model for this research – a participatory approach which brings together diverse perspectives on a programme and assesses its value according to expectations forged at the outset. The research involved five in-depth case studies of cultural relations programmes. The data gathering process included participatory workshops at British Council and Goethe-Institut offices in Cairo and Kyiv with beneficiaries of the programmes, the staff delivering the programmes, and the strategy and policy teams within those two organisations; stakeholder surveys; and in-depth expert interviews. The result provides a snail’s-eye view of cultural relations in the two countries.

The tyranny of metrics

Questions of value in international cultural relations are always not only financial and political but also very much a matter of perspective. Assessing instrumental and the intrinsic dimensions of value of BC and GI projects can be tricky. It required a fresh approach. This is because cultural relations inevitably have influence and accrue value over the long term, but current evaluation methods, not to mention the tyranny of metrics, operate in short-term timescales, via quick-fix, post-project impact analysis. Our research sought to overcome this impasse and to shift the frame from an impoverished cause-effect impact assessment, to a more fully rounded, richer analysis of value from diverse perspectives.

To provide a bird’s-eye view, the Hertie School applied the Cultural Relations Diamond approach, an adaptation of the Civil Society Diamond that was originally developed as a tool to assess the state of civil society in various locations. For each country, the approach combines subjective mappings of influential cultural actors, analysis of a subset of diverse cultural relations activities, an organisational survey of (mainly) cultural actors, expert workshops, and other data. The result is an overview of the status of the cultural scene and of the opportunities for and constraints to engaging in cultural relations and, indeed, making a difference.

Read the smmary by the British Council here

Have you conducted research that relates to the Tuning in project? Contact us