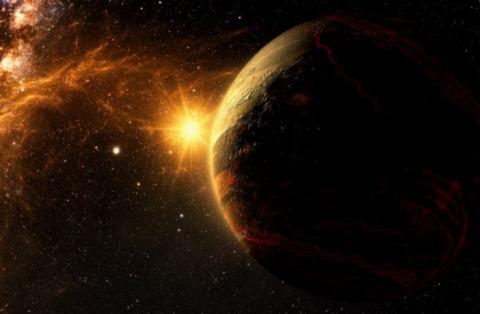 The European Space Agency’s (ESA) exoplanet mission Ariel, set to launch in 2029, has moved from study to implementation phase.

Ariel, also known as the Atmospheric remote-sensing infrared exoplanet large-survey mission, will study what exoplanets are made of, how they are formed and how they evolve, by surveying a diverse sample of around 1000 planetary atmospheres simultaneously in visible and infrared wavelengths. OU astronomers Professor Carole Haswell, Dr Jo Barstow and Dr John Barnes have worked with ESA and partners to make the mission a reality: from conception to informing the study phase and beyond.

Dr Jo Barstow, Ariel Science Working Group Lead and Research Fellow at The Open University, said: “This is an exciting time in the development of the mission. Having worked since 2012 on Ariel and its predecessor concept EChO, developing the tools which will allow us to interpret the observations, it’s a very proud moment to have progressed to this point. I look forward to the mission launch and what Ariel will tell us about how planets and their atmospheres work.”

Mission is set to fill a knowledge gap

Ariel is the first mission dedicated to measuring the chemical composition and thermal structures of exoplanets, linking them to the host star’s environment. This will fill a significant gap in our knowledge of how the planet’s chemistry is linked to the environment where it formed, or whether the type of host star drives the physics and chemistry of the planet’s evolution.

Professor Carole Haswell, explains: “This mission allows us to gain a big-picture overview of the galaxy’s population of planets. Specifically, we will learn about their atmospheric compositions. From this we can work out how planets are formed and their life histories. All of this is important to begin to understand whether the Earth and Solar System are unusual. Ultimately, this has implications for questions about our uniqueness in the Universe.”

The mission will focus on warm and hot planets, ranging from super-Earths to gas giants orbiting close to their parent stars, taking advantage of their well-mixed atmospheres to decipher their bulk composition. Two autonomous, robotic, small-aperture telescopes, owned and operated by the OU’s OpenScience Observatories, will monitor transiting exoplanets which Ariel might observe.

Dr Ulrich Kolb, Director of the OpenScience Observatories at The Open University, said: “Our telescopes are ideally suited for monitoring the appearance and behaviour of transiting exoplanets over long periods of time. This will inform the selection of targets for the mission to study.”

The design and build phase

In the coming months, industry will be asked to make bids to supply spacecraft hardware for Ariel. Around summer next year, the prime industrial contractor will be selected to build it.

Jean-Christophe Salvignol, ESA’s Ariel project manager, said: “We’re pleased to enter the implementation phase of the Ariel mission. We’re moving towards the optimal spacecraft design for answering fundamental questions about our place in the cosmos.”

The mission’s payload module – an onboard data processing system – includes a one metre-class cryogenic telescope and associated scientific instruments. The Ariel Mission Consortium, which includes more than 50 institutes from 17 European countries and NASA, has provided and made contributions to the payload. The telescope’s spectrometers will measure the chemical fingerprints of a planet as it crosses in front of – ‘transits’ – its host star or passes behind it – an ‘occultation’. The measurements will also enable astronomers to observe the dimming of the host star by the planet with a precision of 10–100 parts per million relative to the star.

Professor Haswell adds: “The most powerful tool in astronomy is spectroscopy: spreading light out into its component colours. This allows us to learn the composition of objects we can never hope to visit or touch. Ariel is the first mission dedicated to applying spectroscopy to what I think are the most exciting astronomical objects we’ve ever discovered – exoplanets.”

Ariel will be able to detect signs of well-known ingredients in the planets’ atmospheres such as water vapour, carbon dioxide and methane. It will also detect more exotic metallic compounds to decipher the overall chemical environment of the distant solar system. For a select number of planets, Ariel will also perform a deep survey of their cloud systems and study seasonal and daily atmospheric variations. Ariel is planned for launch on ESA’s new Ariane 6 rocket from Europe’s spaceport in Kourou, French Guiana. It will operate from an orbit around the second Sun-Earth Lagrange point, L2, 1.5 million kilometres directly ‘behind’ Earth as viewed from the Sun, on an initial four-year mission.

This article was written by Bridgette Honegan