Ice, sand and the spiders from Mars in the laboratory 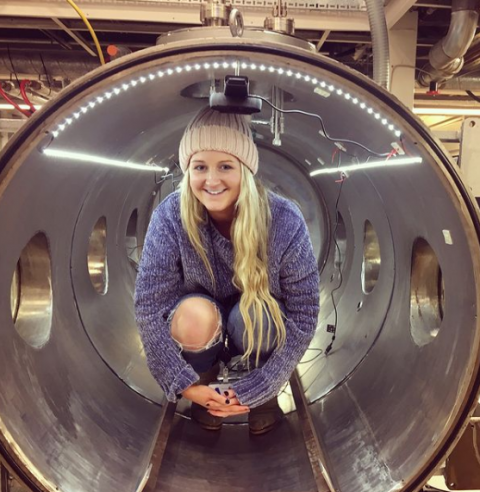 Researchers from The School of Physical Sciences at The Open University (OU) have recreated the formation of spider-like patterns on Mars in their labs. This provides the first physical evidence that these features can be formed by a unique process unlike anything seen on Earth.

In a paper published in Nature Scientific Reports, led by OU Postdoctoral Research Associate, Dr Lauren Mc Keown, the team of researchers from the OU, Trinity College Dublin and Durham University describe a series of experiments conducted at the OU Mars Simulation Chamber, under Martian atmospheric pressure, in order to investigate whether patterns similar to Martian spiders could form by dry ice sublimation; that is – the direct change of CO2 ice from solid to gas.

Spiders in space
Spiders, more formally referred to as araneiforms, are strange-looking negative topography radial systems of dendritic troughs; patterns that resemble branches of a tree or fork lightning. These features, which are not found on Earth, are believed to be carved into the Martian surface by dry ice changing directly from solid to gas (sublimating) in the spring. Unlike Earth, Mars’s atmosphere comprises mainly of CO2 and as temperatures decrease in winter, this deposits onto the surface as CO2 frost and ice. In spring, sunlight is proposed to penetrate this ice and warm the terrain beneath it, causing the ice to crack. Gas will then rush out and carve troughs into the surface forming spiders and depositing the material on top of the ice in the form of a plume.

“This research presents the first set of empirical evidence for a surface process that is thought to modify the polar landscape on Mars. This formation hypothesis has been well-accepted for over a decade, but until now, we have had to rely on a delicate balance between mathematical modelling and our imagination to understand it, because spiders (at least not the creepie crawlie version!) do not exist on Earth.”, said Dr. Mc Keown.

She continued; “The experiments show directly that the spider patterns we observe on Mars from orbit can be carved by the direct conversion of dry ice from solid to gas. It is exciting because we are beginning to understand more about how the surface of Mars is changing seasonally today.”

Creating a Martian environment
The researchers set up the experiment in the OU Mars Chamber so that they could investigate the process in an environment like that of Mars. They drilled holes in the centres of blocks of CO2 ice and suspended these from a claw similar to those seen in arcade games The researchers then lowered the pressure inside the vacuum chamber to Martian atmospheric pressure (6mbar) and used a lever system to place the CO2 ice block on the surface.

The researchers made use of an effect known as the Leidenfrost Effect, whereby if a substance comes in contact with a surface much hotter than its sublimation point, it will form a gaseous layer around itself. When the block reached the sandy surface, CO2 turned directly from solid to gas and material was seen escaping through the central hole in the form of a plume. What remained on the surface following this activity, were patterns very similar to the spiders seen on Mars (

Dr Mc Keown commented; “It is exciting to study the  weird and wonderful processes that are changing the landscape of Mars in the present day. Contrary to popular belief, Mars is an active, dynamic planet, which experiences seasonal changes and understanding these processes which are unlike anything seen on Earth is fascinating for its own sake. On a very practical note, we also need to understand active surface processes on Mars in terms of potential hazards for if we are ever to send humans to these locations.”

‘Fantastic new knowledge’
Dr McKeown first began working on this project when she was a PhD student  studying carbon dioxide as a Martian geomorphic agent at Trinity College, Dublin and she was funded by Europlanet and the Irish Research Council to come over to use the Mars Simulation Chamber, which is led by Dr Manish Patel and also worked with OU researcher, Dr Matthew Sylvest.

“Lauren liked it so much at the OU that she is now working here fulltime,” said Dr Patel.

“This work is a nice example of the fantastic new knowledge that arises from doing experiments that nobody else dares to do – i.e. making a mess in your shiny laboratory chamber.  The experiments show directly that carbon dioxide gas can move the surface material on Mars, creating the spider-like patterns we observe from orbit.  From a personal perspective, Lauren came here as a PhD student to do these experiments in my lab and is now working here as a postdoc, which is great.”

Read the full paper: The formation of araneiforms by carbon dioxide venting and vigorous sublimation dynamics under martian atmospheric pressure