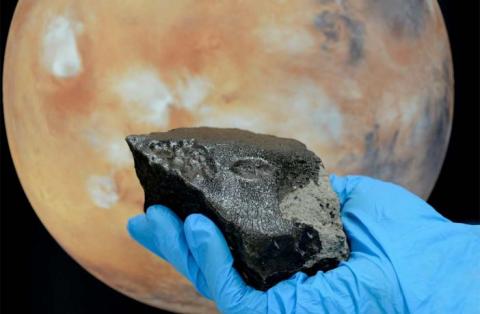 OU researchers Professor Mahesh Anand, Dr Ian Franchi, Dr Susanne Schwenzer and Dr Jessica Barnes, a former student at the OU and an Assistant Professor at the University of Arizona, worked as part of a wider team to make the discovery.

Research findings show that Mars’ mantle may contain multiple distinct reservoirs of mineral-bound water preserved from the planet’s early history, which suggests that the Martian mantle has a diverse chemical composition and might not have been formed from a global magma ocean.

Mahesh Anand, Professor of Planetary Science and Exploration at The Open University, said:

“The findings from this study have important implications for our understanding of the geological history of water in the inner Solar System and the formation and differentiation histories of rocky planets, especially in a star’s habitable zone.”

The team led by Dr Barnes, a former PhD student and a postdoctoral researcher at the OU where this work began, analysed the hydrogen isotope composition of minerals from two meteorites from Mars’ crust, where the meteorites interacted with water around 1.5 and 3.9 billion years ago.

Researchers found that the two meteorites have a similar hydrogen isotope composition. This composition is also similar to more recent material from the planet’s crust, indicating that the composition of water has been consistent for the past 3.9 billion years.

Researchers compared this to data from other Martian meteorites and found that Mars’ mantle contains at least two reservoirs of mineral-bound water that have distinct hydrogen isotope compositions.

Findings, published today in Nature Geoscience, suggest that the differing composition of these reservoirs indicates that Mars may not have been homogenized by a global magma ocean after it formed, as previous research suggested.

Dr Barnes, Assistant Professor at the University of Arizona, comments:

“These two different sources of water in Mars’ interior might be telling us something about the kinds of objects that were available to be accreted into the inner, rocky planets. This context is also important for understanding the past habitability and astrobiology of Mars.”

The work at the Open University was partially supported through a Science and Technology Facilities Council (STFC) research grant awarded to Professor Mahesh Anand and Dr Ian Franchi.