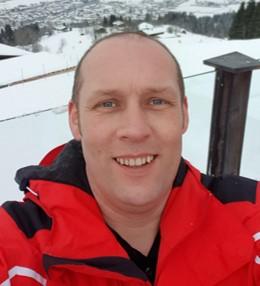 We are delighted to announce that Open University Space Science Postgraduate student, Iain Muirhead, has been selected as the winner of the Paul Lidgett Memorial Prize for his achievements in 'SXP390 – The Science Project Course: Radiation and Matter'. We think Iain has a really inspiring story behind his studies with the Open University and we wanted to share it here.

Iain is a British Army Warrant Officer serving in the Royal Corps of Signals. Having left school at 15 with no qualifications, at 19 Iain joined the Army as a Communications Systems Operator. Whilst serving, he gained the confidence to return to education, where he chose to follow his interests in space and astronomy by studying towards a BSc in Natural Sciences (Physics) with the Open University. Combining distance learning with a demanding military career has, understandably, been a huge challenge for Iain, but he soon learnt that you really can study anywhere. Over the years he’s worked on modules whilst in the jungles of Belize and the deserts of the Middle East, knowing that he had the great support of the OU tutors and his military chain of command.

Iain gained a distinction in the Open University Stage 3 Astrophysics course and chose to conduct an in-depth study into the search for moons around exoplanets as his final degree project, for which he was awarded a distinction, and the Paul Lidgett Memorial Prize.

Iain told us: “Studying for a physics degree has been the most challenging and rewarding thing I have ever done. This has really set me up for the future and I have now continued on to study postgraduate Space Science with the OU, again by distance learning and supported by my Unit. I hope to be accepted onto an Astrophysics PhD when I leave the military and eventually move into a second career in Space research. This is something that I would have never dreamed possible without the opportunities offered  by the Open University and the confidence gained during my time in the British Army.”

Congratulations to Iain on his achievements and we look forward to seeing more of his work in the future.