Our research in extragalactic astronomy covers a range of topics including astrophysical surveys, strong gravitational lensing, high-redshift star formation, extragalactic jets, AGN feedback and galaxy cluster physics. We have leading roles in a number of ongoing and next-generation surveys and missions, including Euclid, SPICA, LOFAR and the Athena X-ray Observatory). 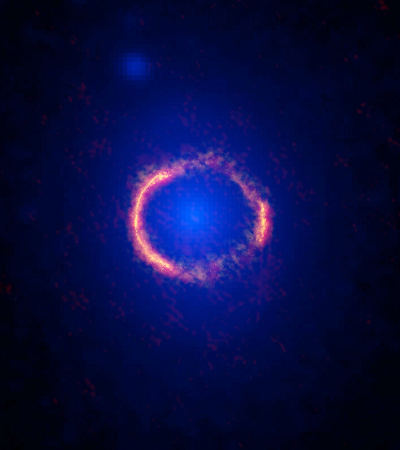 Throughout the history of the Universe, half of all the energy emitted by stars has been absorbed by dust and re-emitted as thermal radiation. We use infrared astronomy to probe this re-radiated energy in galaxies, and to measure their physical conditions using emission lines from molecules, ions and atoms at wavelengths where this dust is transparent. We use a wide array of ground-based and space observatories, including ALMA, JCMT, IRAM, SMA, AKARI, Herschel, and in the future JWST and hopefully SPICA. We are particularly interested in using strong gravitational lensing, which is where a background galaxy is aligned along the line of sight with a foreground galaxy or cluster, and the background galaxy is seen as being magnified in flux and size by the curved spacetime around the foreground mass. These lensing events are very rare, but we have found that submm-wave infrared extragalactic surveys are extremely efficient at finding galaxies boosted to bright fluxes by lensing. This makes fainter and/or more distant galaxies accessible to our instrumentation. This is also one of the very few ways of probing the distribution of dark matter in the Universe, and gravitational lensing statistics can be used as a constraint on cosmological parameters. 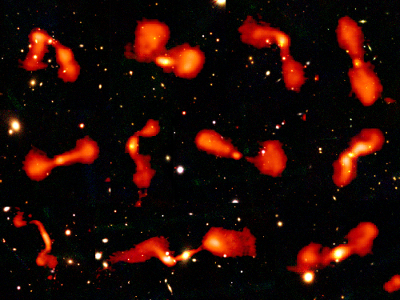 A montage of low-power radio galaxies from the HETDEX region of the LoTSS survey, shown on an optical background. Credit: Judith Croston and the LOFAR surveys team

Jet from supermassive black holes are a relatively rare phenomenon in the galaxy population as a whole, but are common in the most massive galaxies, and in rich group and cluster environments. Jets are now known to be an important feedback method by which galaxies expel energy and regulate the growth of stars – this makes them a vital ingredient in models of galaxy formation cosmological evolution. Our research in the area of radio-loud AGN focuses on:

We use multi-wavelength observations and modelling to tackle these questions, particularly X-ray and radio observations from facilities including LOFAR, VLA, GMRT, XMM-Newton and Chandra. 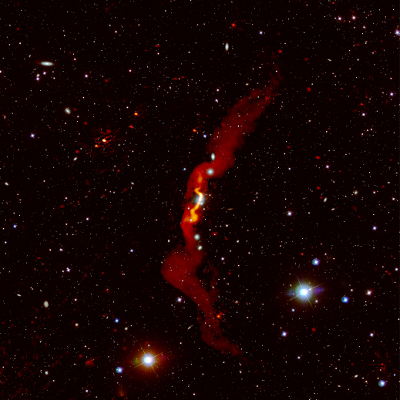 The jets from the radio galaxy 3C31. Credit V.Heesen/J.Croston/LOFAR/SDSS/p>

We are also interested in the evolution of galaxy groups and clusters more broadly, including how their galaxy populations evolve, which is known to depend on environment but for which the underlying physical process(es) are poorly understood. X-ray observations provide a relatively straightforward and robust cluster detection method as well as a powerful means of tracing the history of how baryons have evolved over cosmic time, recording the energy injection and metal enrichment as a result of galaxy feedback of various sorts.  The Athena X-ray observatory (due to launch in 2028) will provide unprecedented sensitivity at high spectral resolution to investigate these questions. Building on our research with the current X-ray facilities, XMM-Newton and Chandra, we are involved in planning for studies of clusters and AGN feedback with Athena, which will include carrying out a wide-area survey to find some of the earliest galaxy groups and clusters, tracing the evolution of energy injection into the intra-cluster medium, and directly measuring the dynamically evolving cluster gas around expanding radio-galaxy lobes for the first time.