The fly by of asteroid (2867) Steins occurred in September 2008. Rosetta used its cameras to image the asteroid for approximately one month before attempting the flyby as there was some ambiguity regarding the asteroid’s orbit. Earlier monitoring of the light reflected from the asteroid by the OSIRIS camera in 2006 had also constrained the rotational period (the time taken for a single rotation) to approximately 6 hours.

The closest approach to asteroid Steins, at a distance of 800 km, occurred on the 5th of September 2008. Rosetta was manoeuvred to keep the asteroid in view of the imaging instruments as the probe flew past. During the flyby, the instruments OSIRIS and VIRTIS were used to produce images of the asteroid. 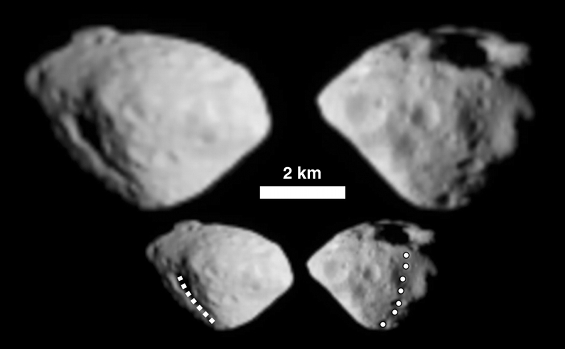 As a result of the Rosetta flyby, Steins was revealed to be broadly diamond shaped with dimensions of 6.67 × 5.81 × 4.47 km. At the South pole of the asteroid there is a large impact crater approximately 2 km wide and 300 m deep. The images also revealed a chain of craters running from the South to the North pole. These features suggest that asteroid Steins experienced a large impact, which fractured the entire body and implies that the asteroid will eventually fall apart.