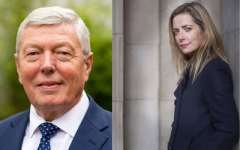 The Open University is delighted to support The Body Politic: Alan Johnson and Sarah Vaughan at Bloody Scotland 2022.

Former MP Alan Johnson carved out the beginnings of a new career with his lauded debut, The Late Train to Gypsy Hill. Now the one-time Labour Home Secretary has returned to the scene of the crime for his second novel, One of Our Ministers is Missing as a government minister in the Foreign Office disappears without trace.

Sarah Vaughan was formerly a political correspondent with The Guardian and brings all that experience to bear in her stylish thriller Reputation as an MP is accused of a journalist’s murder. Sarah’s previous novel, the impressive Anatomy of a Scandal was made into a hugely successful Netflix series.

Tickets are £10 (£9 concession), available from the Bloody Scotland website.

You can try Creative Writing course content for free, on the OU site OpenLearn, such as Start writing fiction.