There is a national shortage of professionals with cyber security skills in the UK. In this blog Suzanne McQuade explores how IBM utilised the Graduate Apprenticeship scheme in Scotland, to upskill its talent pipeline from within.

The technology company IBM recently put one of its employees through The Open University’s Master of Science (MSc) in Cyber Security Graduate Apprenticeship. Curtis Craig, a Cloud Security Architect and managing consultant, is one of the first graduates of the relatively new postgraduate level apprenticeship, which was launched in Scotland in 2018.

"Security is one of our strategic growth areas and we are growing at around 15% a year in terms of headcount. In a market with a huge skills shortage, the more we can do to address individual wants and needs and enable long term commitment back to the company, the better.” 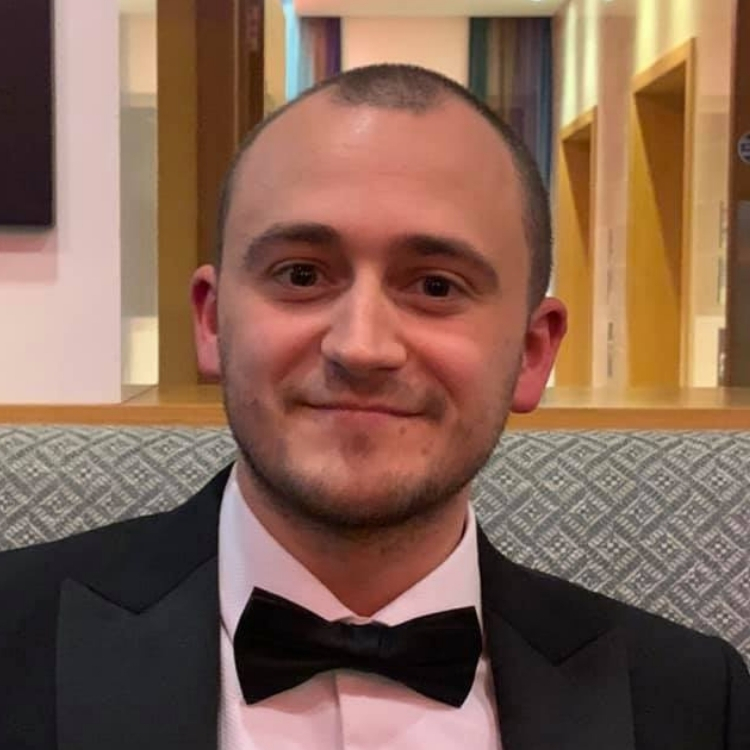 Curtis (pictured) already worked in cyber security, but he wanted to develop his skills further, gain formal recognition for his knowledge and put himself in the position for promotion. The apprenticeship has been a key part of his career development the past 18 months, with IBM including it in his end of year assessment.

Nessa said she could see Curtis’ skills as a cyber security specialist improving soon after he began the course as he incorporated what he was learning into his everyday work:

“We are reaping the benefits in a number of ways because of how Curtis has studied. It has fed straight back into the quality of client bids and presentations, for example. Curtis has also been doing coaching and mentoring with more junior colleagues. The Masters has helped position him to move into a more senior role, while he was undertaking it.”

It’s the second apprenticeship that Curtis has completed in the past nine years. He left school aged 17 and joined IBM to do a National Vocational Qualification (NVQ) Level 3 in telecoms and IT. He said:

“I had been accepted at university but felt that higher education at 17 wasn’t right for me.”

The Open University’s Masters apprenticeship appealed to Curtis and Nessa because it enabled him to learn new, important skills, acquire greater academic understanding and gain a recognised postgraduate qualification, but without duplicating his existing industry knowledge. She says:

"We both assessed what was on offer and agreed that the Masters was the best fit. And Curtis not having a degree previously wasn’t a factor.”

The Graduate Apprenticeship is an integrated work-based learning programme. It has been designed to take into account a person’s existing knowledge and experience. This enables apprentices to learn new skills, further their professional development and achieve academic recognition, without having to cover content they already know.

It’s about having the flexibility to ensure people can develop new skills and behaviours, but without duplicating learning.

The MSc covers a range of topics, including information security and digital forensics. One of the modules Curtis found most useful was the one on configuring networks. He also found that the apprenticeship has improved his wider skills set, enhancing his business and interpersonal skills.

“You pick up softer skills, such as doing presentations,” he says. “Also, meeting deliverables, which is really important. I’m already putting these skills to good use.”

Curtis and Nessa agree that two things were key to the success of the apprenticeship: the flexibility and support offered by The Open University. Curtis was able to balance work and study commitments, according to deadlines and priorities. He travels a lot with work and so not having to study in a specific location was essential.

Nessa says the regular communication between her, Curtis and the OU was vital:

“I knew what was going on, could see the curriculum and had a clear picture of demands and deadlines. I knew what to expect and we could juggle priorities. The commitment from Curtis and the flexibility made it a success – he still delivered on the day job."

The registration closing date for the MSc in Cyber Security Graduate Apprenticeships starting in November 2020 is 30 September 2020.

The OU also offers Graduate Apprenticeships at undergraduate level, with a Bachelor of Science (BSc) Honours in Cyber Security or in Software Development.