Dr Michael Dempster: A year of firsts for Scots language

Dr Michael Dempster is the Director of the Scots Language Centre and is Creative Scotland’s Scots Scriever.

[This article was originally published in Standard English in The Scotsman. There's also a version of the article in the Scots language.] 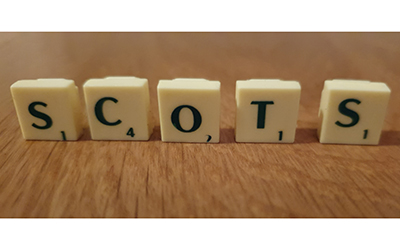 The first digital map of Scots place names was launched by the Deputy First Minister and the first Scottish Government Scots Publication Grant saw support going to many publishers to put out new work in Scots.

Whit's gaun on here?! Since I've played my part in many of these firsts, I can report from their midsts. It's mostly first language Scots speakers from all dialects using and celebrating their own language. That doesn't sound like a big deal, and it shouldn't. We do know, however, that the simplest of things can have a radically different meaning to one person than to another. 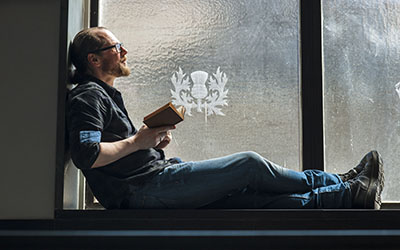 For myself the most interesting question is – What does this mean to a Scots speaker? For many of us, our experience of our language being the centre of attention is it being scrutinised, ridiculed and ultimately forbidden. Often anticipation of this is our first response.

Gladly I can say this is not the case here. With the free Open University (OU) course in particular, there is now more of an opportunity than ever for speakers and learners of all ages to learn about this thing we do with our mouths, our language. However, it is worth bearing in mind the language environment particular to Scots.

Until the dawn of digital communication, Scots was largely invisible in the mainstreams of Scottish culture, it being conducted in Standard English. Often the only time one would encounter Scots was in the trope of ‘the incomprehensible Scot’, this sometimes extending itself beyond Scots into English spoken with a Scots accent.

We still have 'accent reduction specialists' who teach Standard English to people with Scottish accents and encourage 'dropping the ‘r' and altering vowels.

Further below the radar is when Scots is put into the mouth of a dramatic character as a shortcut to indicate the type of person they are. This can be done without intent to harm, by a creator searching for authenticity or wishing to give voice to a marginalised person. This runs the risk of building stereotypes, where, as a Scots speaker, you only hear your voice in a disempowered way.

Speaking Scots does not imply any personality type, a political position, nor is it an indication of intelligence or educational achievement. After all, what kind of character would be implied by someone being a French, or German, or Standard English speaker?

It is incredible to hear Scots now in the mouths of all. By taking our Scots seriously, we can expand our horizons not only in terms of self-knowledge, but with self-development. Just as we develop our vocabulary and understanding of English, we can do the same with our Scots. Language is learnable, so we can bring new speakers into our language community, just as people over the centuries have naturally done.

With this healthier take on Scots, and not bad-English, we can begin to consciously use our knowledge gained from behaving multilingually to access other languages. We know, for example, from ‘arm pit’ / ‘airm pit’ / ‘oxter’, that it is far easier to learn another word for something - in this case another word for that body part being ‘achlais’ - if you don't believe that there is only a single word for it in the first place.

It is excellent that the Scottish Government’s ‘1+2’ language policy – which aims to enable all pupils to learn two additional languages from primary level onwards – includes Scots. Both Scots speakers and learners are in a far better position today than they have ever been for jumping-on points.

From the ever-growing resources of the Scots Language Centre website, to the brand-new free Scots language and culture course from The Open University, and more confident use of Scots in creative work, advertising and broadcast media, the 2020’s are looking bright for the Scots language.

There is always more to contribute, join in!

The Open University’s free Scots language and culture course is available on the OpenLearn Create site.

Dr Michael Dempster is a first language Scots speaker. He is the Director of the Scots Language Centre and is Creative Scotland’s Scots Scriever; a residency at the National Library of Scotland to produce original work and raise the profile and understanding of creative work in the Scots language. He wrote one of the units of the OU’s Scots language and culture course.