Carol Morris is a Senior Lecturer in Engineering and Innovation at The Open University.

She was selected as one of the ‘Top 50 Women in Engineering’ in 2018, by The Telegraph/ Women’s Engineering Society/Scottish Power, for her work on encouraging more women to study engineering The Open University.

Like many people, I was struck by the beautiful, innovative design of the recently opened V & A Museum of Design in Dundee.

I’ve marvelled at the imagination and vision of the Japanese architect, Kengo Kuma, but, as an engineer, I’m more interested in the processes involved in making sure that Kuma’s design could be translated into a functional building which people can enjoy and which doesn’t topple into the River Tay!

As well as the architects, the project also needed consulting engineers. The chances are that most of the engineers working on the project were men, as currently only 9% of professionally registered engineers in the UK are women.

Engineers are the people who design, build and invent things that benefit society and almost everything around us has been engineered in some way. The laptop computer that I’m writing this piece on, the electricity that I need to power it, my house, my car and even my clothes have all been engineered. So why, when the work that they do has such a positive impact on society, are there so few female engineers? 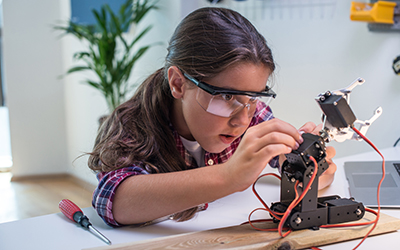 As someone who transferred into engineering in my mid-thirties, I’ve long been interested in understanding why such a creative, varied and well-paid career fails to attract more women. Most undergraduate degree engineering courses have around 16% female students, although it varies by discipline, with only 10% opting for mechanical engineering.

In Scotland only 3% of those on engineering apprenticeship programmes are women. There have been numerous initiatives over the last 30 years aimed at increasing the number of women in engineering, but many of these have been directed at 16-17 year old girls, and have had limited success because girls generally have fixed ideas about engineering by this age.

Recent research suggests that ideas about engineering are formed at a very young age and certainly before children leave primary education. A survey carried out in 2017 by Engineering UK found that twice as many girls as boys, aged 7-11, described engineering as ‘too difficult’ and nearly four times as many girls thought it was ‘boring’.

Engineering was never suggested to me as a career when I was at school and, even if it had been, I would probably have thought that it was something to do with engines and involved lots of oil and grease. Even today, the misleading image of the engineer permanently attired in a high-vis jacket and wearing a safety helmet prevails in the popular media and these misrepresentations can have a profound impact on subject and career choice.

My own research – involving interviews with mature female engineering students – reinforces the view that many girls are either not told about engineering as an attractive career, or are actively discouraged by parents and teachers – the people who are most influential when it comes to career choice.

The UK’s Institution of Engineering and Technology found that toys with a science, technology, engineering or mathematics (STEM) focus were three times more likely to be targeted at boys than girls, so it’s hardly surprising that girls don’t consider engineering as something they might want to do.

When asked why they were studying engineering the most common response from my interviewees was that they wanted to make a difference to society. As engineers design and build things which benefit society it is really important that the workforce reflects the diversity of today’s society.

The Scottish Government clearly recognises the vital contribution engineers make to Scotland’s economic prosperity and growth, so it was encouraging to read in their Programme for Scotland 2018-19 about the introduction of £20k bursaries to enable career changers in STEM to retrain as teachers. There is also a commitment to ‘improving the gender balance of those participating in STEM learning’ and to ensuring that young people have high quality careers information.

I was saddened to read recently that a young girl was turned away from an engineering event by a careers advisor because it ‘was for boys.’ Her mother subsequently took to Twitter to express her outrage and she was offered several opportunities to visit engineers in their workplaces, but deep-rooted gender bias like this impacts on the everyday lives of girls and can seriously affect their self-confidence and aspirations.

I hope that the Scottish Government’s initiatives go some way to redressing the gender balance in engineering and perhaps there will be many female engineers working on Scotland’s next iconic building.

If you would like to return to a career in STEM, you might like to try the free introductory-level online toolkit 'Reboot Your STEM Career', or the free advanced-level badged course 'Returning to STEM', on the Open University’s site OpenLearn: www.open.edu/openlearn