James Robson is Professor of Classical Studies and Head of the School of Arts and Cultures at The Open University.

He is author of 'Aristophanes: An Introduction and Sex and Sexuality in Classical Athens'.

As a scholar of humour, and a huge fan of stand-up, I always get a flutter of excitement when the Edinburgh Festival Fringe is in full flow.

Gathered in Edinburgh this year are some of my must-see favourites such as Henning Wehn (‘The German comedy ambassador’) and Graham Fellows (aka John Shuttleworth).

But the Fringe’s tagline ‘Into the Unknown’ provides a useful reminder for me to seek out fresh talent at the Festival in an effort to discover new comic perspectives on the world and novel ways of raising a laugh.

In a year where gender politics, sexual behaviour and sexism have been such live issues, what particularly interests me is the way that comedians are now discussing, having fun with, or simply avoiding these controversial subjects. 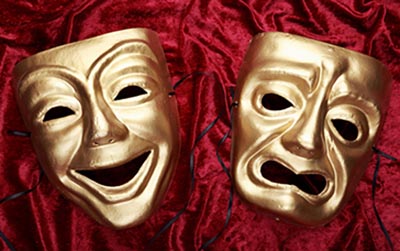 Humour has always provided a vehicle for performers – and, indeed, all of us – to explore topics that might otherwise be difficult to broach, but how is this playing out now in the summer of 2018?

At this point I need to confess that I am a scholar of the ancient rather than the modern world. My own research focuses on comedy in Classical Athens in the late fifth century BC, but for me comparing and contrasting ancient and modern perspectives can provide exciting new ways to view both cultures.

OK, so these comparisons need to be handled carefully. Gender roles in classical Athens were far more prescribed than those of today and in this deeply patriarchal society there was certainly no equivalent of the #metoo movement (or #kaiego, as an ancient Greek might say).

But with Athens suffering substantial losses of menfolk in its prolonged war against Sparta and with gender demographics in the city consequently skewed, the late fifth century was a period when the role of women became an increasingly hot topic amongst Athens’ chattering classes.

What is fascinating for me is the way that ancient comic writers – all of whom were men – seized on male concerns about women’s increasing visibility and importance in the city, using the ability of comedy to present mischievous and fantastical ideas to its audiences, while simultaneously exposing and playing on social anxieties.

The main way Athenians consumed their comedy was in the theatre in the form of comic plays, staged as part of a civic festival.

And in 411 BC, Aristophanes, Athens’ most celebrated comic playwright, served up the play Lysistrata, where women seize control of Athens, stage a sex strike and subjugate its men in an effort to put a stop to the war.

Since this was probably the first time that ordinary women featured as the main characters in a comedy, this was a devastating theatrical coup.

But interestingly, too, in the play Athens’ women are largely characterised as wine-loving, deceitful, aggressive and sex-mad.

This is a misogynist stereotype, to be sure, but from the comic playwright’s perspective it is also provided a highly effective way of amusing, teasing and unsettling his predominantly male audience.

The potential that comedy presents for exploring difficult issues is worth considering further.

One important quality that humour offers to all of us, comedians included, is that we can always claim that the primary purpose of our jokes is to make someone laugh – and not, say, to convey our personal opinions and prejudices.

This allows joke-tellers to sail much closer to the wind than they might otherwise, though not necessarily in an unproblematic way. Whatever joke-tellers might claim, others may still view their humour as sexist, racist, or homophobic, for example.

This use of humour to broach thorny issues is put to use in everyday life, too. Modern studies have exposed the ways in which jokes are used by terminally ill patients to talk to their carers about the taboo topic of death or how humour is used in flirtatious conversations.

So, I’m heading off for my comedy fix at the Fringe full of anticipation this year. I am not expecting to encounter the dangling, leather phalluses and sexploitative portrayal of women that an ancient Athenian theatre-goer might have witnessed 2,500 years ago.

But I am looking forward to discovering how this modern crop of comedians deals with society’s current sensitivities and talking points.

What issues will they be prepared to tackle head on? Where will their flights of comic fantasy take us and where will the boundaries be drawn?

My own research on ancient comedy looks at these issues in the ancient Greek world, but these questions are all the more pressing when we are watching comedy today.

You can watch film clips about the language of comedy, featuring comedians who are appearing at the Edinburgh Festival Fringe - such as Henning Wehn and Graham Fellows - and read more about Open University research on ancient and modern comedy, at www.open.edu/openlearn/tags/comedy