Dr Mahesh Anand is a Reader in Planetary Science and Exploration at The Open University.

He co-ordinates the UK-node of the NASA Solar System Exploration Research Virtual Institute.

When Apollo 11 landed on the Moon on 20 July 1969, history was made. Fifty years later, it stands as arguably the greatest achievement of the twentieth century and a testament to human endeavour and perseverance.

Astronauts Neil Armstrong and Buzz Aldrin spent just under twenty-four hours on the Moon, including over two hours of field work at the lunar surface.

Meanwhile, Michael Collins encircled the Moon in the Command Module, perhaps best-positioned to contemplate the meaning of life or our place in the Universe.

Down at the lunar surface, Armstrong and Aldrin performed several experiments, but arguably their most important task was to collect the first ever samples of the Moon.

Apollo 11 returned 22 kg of lunar samples to Earth. It was to be the first time that scientists were able to analyse Moon rocks in Earth-based laboratories and set in motion a series of discoveries that continues to this day. 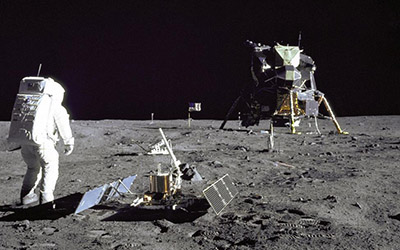 Over the past decade, I have been extremely fortunate to lead several projects working on Apollo samples at The Open University.

Thanks to the Apollo astronauts and the curators at NASA, researchers such as myself - who weren’t even born when the Apollo Moon landings took place - are still able to study Moon rocks and feel part of a shared historical adventure.

By sheer coincidence, The Open University was awarded its Royal Charter just three months before the first Moon landing, heralding a new era not just in space exploration but also in higher education.

Not surprisingly perhaps, The Open University has championed space research for most of its existence and indeed we are very proud of our continuing leadership in this global endeavour.

Indeed, it has been very exciting to be involved in the theory-changing discovery of water in Moon rocks, which had been thought to be devoid of water for almost four decades since the first samples were analysed in 1969.

Over the past decade, my team at The Open University have been undertaking cutting-edge laboratory research to look for water - and other associated elements such as carbon, nitrogen, oxygen - in Moon rocks.

Our findings suggest the presence of a water reservoir in the Moon which is similar to certain parts inside the earth’s structure.

Furthermore, the distinctive chemical composition of the water in the lunar samples points towards water in the Moon having a common origin with that of the Earth and asteroids.

Despite these Apollo samples having been collected 50 years ago, this field of research remains active, as many new questions have arisen through recent findings.

Some of these new questions can only be addressed effectively by returning to the Moon with custom-built instruments to perform experiments in-situ, followed by missions returning samples from areas of the Moon that were not visited by the Apollo missions.

As water is a key commodity and a precious resource for supporting space exploration - it is required for life support and can be used in radiation protection and rocket fuel - finding water on the Moon has reignited interest beyond traditional space powers and a new ‘Moon Rush’ has begun - just look at the number of new space-faring nations and private entities targeting the Moon.

New research will explore the possibility of building habitats on the Moon. The availability of water on the Moon will play a vital part in realising our bold ambition of living on the Moon in the not too distant future.

As we look forward to the next fifty years of space exploration, we must acknowledge the contributions countless individuals made towards the success of what was once an unimaginable dream of landing humans on another planetary surface.

Just as the members of the Armstrong clan in Dumfries and Galloway several centuries ago couldn’t know that one of their descendants would be a Moonwalker, we must continue to inspire and engage the future Neil Armstrongs of the world who will realise the dream of extending humanity’s presence to the Moon and beyond in a safe and sustainable manner.

This article was originally published by The Scotsman.

Learn more about the Moon landings on OpenLearn.

Image: Apollo 11 - Aldrin Looks Back at Tranquillity Base. Credit - NASA.