Making the headlines in 2017 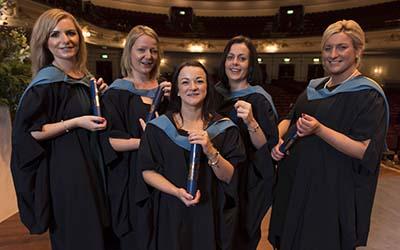 As 2017 draws to a close, we look back on what has been a busy year at The OU in Scotland.

Over 650 students received degrees at our Edinburgh ceremonies, including the registered nurses pictured, right.

There have been milestone project and partnership celebrations, and new free courses unveiled.

Here are some of the news stories and blogs that have been making the headlines on The OU in Scotland website in 2017:

A response to the independent review of student support in Scotland.

OU in Scotland Director Susan Stewart blogs for Wonkhe on support for part-time students, following the publication of the Scottish Government-commissioned independent review.

Free online courses including The Scottish Parliament and law-making, and Scottish courts and the law have been released by The Open University, aimed at aiding public understanding.

Andy Lowndes, Deputy Chair of charity Playlist for Life, which was founded by OU Honorary Graduate Sally Magnusson, blogs on some of the most frequently-asked questions.

The Scottish Government awards £1.28m for The OU in Scotland and partners World Vision Zambia to develop and roll out a programme for up to 4000 primary school teachers and leaders.

Sheila from Motherwell was set to graduate this year with a BA (Honours) Degree in Environmental Studies.

First registered nurses step across the stage at degree ceremonies.

The first nurses graduate with a degree at an OU ceremony, the result of an OU-NHS partnership with funding from the Scottish Government.

Sheila Macdonald from Inverness has supervised assessments with The Open University in Scotland for four decades, setting out exam papers for hundreds of Highland students.

OU celebrates 10 years of higher education in the classroom.

The OU's Young Applicants in Schools Scheme (YASS) enables S6 pupils to study at university level in the familiar surroundings of their own school.

Celebration of 10 years of partnership between the Scottish Trades Union Congress and The Open University in Scotland.

An event in Glasgow marks the signing of a Memorandum of Understanding between the two bodies in 2007, and looks forward to a new decade of learning opportunities for 580,000 workers.

Using online resources to widen access and bridge gaps in education in Scotland.

The Opening Educational Practices (OEPS) project was led by The OU in Scotland and ran for three years until summer 2017. Its Co-Director Pete Cannell blogs about its work.

Primary school teachers are learning French or Spanish and how to teach it in class in a project run by The OU in Scotland and SCILT, Scotland's National Centre for Languages.