Andy Lowndes is Deputy Chair of Playlist for Life.

He acts as the charity’s Music Detective, raising awareness of the power of music in dementia care and helping people find the music that means most to them.

An estimated 100,000 people live with dementia in Scotland and that number is set to increase year on year. Dementia is a catch-all term for a number of degenerative brain diseases, such as Alzheimer’s Disease, for which there is currently no cure.

Dr Sally Magnusson, Honorary Doctor of The Open University in Scotland, founded the charity Playlist for Life after her mother’s death in 2012.

Songs from car trips, childhood lullabies, holidays, times around the piano, and music from the shows, Scots ballads, hymns – these all had autobiographical memories attached and came with the full range of emotions that made Mamie human and unique. 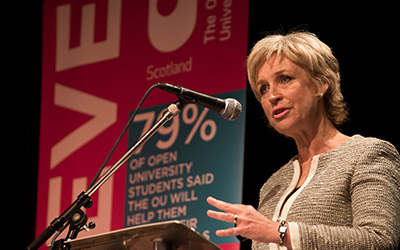 Sally had discovered music was the ‘chemotherapy’ that could make every day of care-giving so much easier, during her late mother’s journey with dementia.

Our charity seeks to ensure that everyone living with dementia gets access to the soundtrack of their lives in music.

Here are some of the questions we are asked.

Q: My husband grew up in a music-free household. Will music be good for him?

You never know till you try. A family from North East Scotland said ‘Dad was never musical’.

What was part of his life? The answer was ‘Fitbaw, jist fitbaw.’

I contacted Aberdeen Football Club and asked their historian what songs from the terracing would have been sung in the 50s, 60s and 70s.

Those are the songs we gave Bob and when he heard them his eyes lit up. Aye, Bob was musical!

Think out of the box a bit. Music has many forms. Try TV theme tunes, poetry. Even bird song is on some people’s playlists.

Q: What if music has painful memories for someone?

Music is often linked to autobiographical memory and the emotions connected to those memories. We probably all have music on our playlists that will make us laugh, smile and even cry.

We say stop the music if it brings tears and think about what is happening.

Does the music remind us of some terrible event? If so, we don’t play that music again. Or is it a natural reaction to a memory or loss that we would rather have? What to do is stay with the individual, comfort and talk to them.

Q: Is there any value to creating a playlist of stimulating rather than personally meaningful music?

Listening to music should be fun so, yes, do create a ‘long list’ of stimulating music. But research suggests that music with personal meaning has the most power to help a person, so from that ‘long list’ we can create smaller playlists that have particular use.

We are working with caregivers who have adopted personally meaningful music as an intervention to carefully schedule the playlist.

There may be a stimulating playlist to help someone wake up, a playlist to encourage calmness before mealtimes or bedtime, or one that helps at bath or toilet times.

Each person’s dementia is unique and the times when a playlist will help is also very individual.

Q: Does the music you listened to as a teenager have more meaning?

Yes. Most of us have few memories of our early childhood. But between the ages of 10 and 25, we lay down many autobiographical memories, what we call “the Memory Bump”.

How often have you been driving along and a song from your adolescence comes on the radio, and even though you’ve not heard it for years you can sing it word perfect? That song transports you back to the time you heard it first, doesn’t it?

Music is neurologically special. Its ability to set off fireworks in our brains, to enable our brains to work harder and establish new neural connections thought lost forever, is special.

Whilst science keeps seeking out new biological treatments and a potential cure for the different types of dementia, we must invest in those human interventions that enable persons living with dementia to stay connected, most crucially to themselves.

Find out more about Playlist for Life.