Dr Martin Robb is a Senior Lecturer in the School of Health, Wellbeing and Social Care at The OU.

He currently chairs Critical Practice with Children and Young People, a core module in the MA in Childhood and Youth.

Martin's academic research has been broadly concerned with issues relating to gender, identity and 'care', with a recent focus on fatherhood and young masculinities.

Earlier this month I was in Glasgow to speak at a conference on ‘Supporting Boys’ organised by Policy Hub Scotland and Red Harbour.

I’m grateful to Mark Bellamy and Claire Hunter for the invitation to take part in what turned out to be an inspirational and thought-provoking event.

Attended by practitioners from diverse backgrounds from across Scotland, the conference included presentations and interactive sessions on a mind-blowing variety of topics – from educationalist Ali McClure talking about differences in the structure of boys’ and girls’ brains and getting audience members skipping and dancing, through Laura Sharpe from See Me on screen addiction and mental health, Daljeet Dagon of Barnardo’s on boys as victims of sexual exploitation, Graham Goulden on the need to invite, not indict boys, to Martin Daubney on young men and pornography.

My own session focused on young men, masculinity and role models, and drew on the findings of two research projects in which I’ve been involved in the past five years: ‘Beyond male role models’, in collaboration with Action for Children and funded by the ESRC (ES/K005863/1), and ‘Young men, masculinity and wellbeing’, in partnership with Promundo and supported by Axe/Unilever.

As part of my presentation, I showed the shorter version of the video that we commissioned as part of the former study, featuring young male service users and support workers at two centres: Working With Men in London and Moving On in Kilmarnock.

It’s a powerful film, illustrating not only the broken relationships and horrific experiences that many ‘at risk’ young men have been through, but more positively, the fact that it’s never too late to make a change.

However, both the film and our wider research highlight the fact that, for many young men who have led troubled lives, making the transition from reckless and self-destructive young masculinity to responsible adult masculinity can be a difficult process – and there’s a desperate need for the kind of support offered by services like Working With Men and Moving On, to hold and carry young men through that transition. 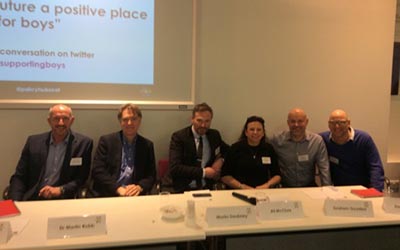 I’d been asked to speak about the importance of male role models, but while acknowledging the grain of truth in what our research team termed the ‘male role model’ discourse, I tried to highlight some of the dangers of too great a focus on the gender identity of the adults who work with boys and young men.

Yes, many of the young men who end up using social care services have not had a consistent father figure in their lives, but drawing a straight line of cause and effect between this absence, and the multiple challenges they face as young men, may be too simplistic.

What’s more, our research clearly shows that ‘present’ fathers, and other men, can be a problem too, often modelling exactly the kinds of hypermasculine behaviour that have got boys into trouble in the first place.

There’s also a risk of overlooking, or worse stigmatising, the positive role that mothers and other women can play in boys’ healthy development, even when there isn’t a man around.

Often, mothers, grandmothers, aunts, or older sisters, have been the only consistent and positive influence in a boy’s life, and many men will admit that if they’ve learnt anything about how to be a good father – and by extension a good, caring man – it’s been mainly from their mums.

Finally, I made the point that, whenever we’ve asked boys and young men whether the gender of the worker, or the adult supporting them, is important, the overwhelming response has been that it’s much less significant than the individual’s personal qualities.

To be sure, some young men preferred working with a male member of staff, but just as many said they responded better to a female worker, while the vast majority claimed gender – or indeed, any other kind of social identity – wasn’t really a key factor.

Instead, what young men using social care services told us time and again was that they valued adults who were committed, consistent, respectful – and above all, who genuinely cared about them.

And support workers told us that building consistent, respectful relationships of care with troubled young men was absolutely vital in helping them to turn their lives around.

These are themes that I’m hoping to take forward in future research. For example, I’m currently working with a group of colleagues, from a range of organisations, on a funding proposal around young fathers, relationships and wellbeing.

We’ve already identified some groups of young dads, and support workers, in the south of England, who are keen to work with us, but we’d be really interested to make contact with others, especially those based in in the north of England, Scotland and other parts of the UK, whether working in the community or in prisons, with similar interests.