Veterans have poetic licence to reveal their deepest feelings

Siobhan Campbell is Co-Chair of the Master of Arts in Creative Writing at The Open University.

Her latest collection of poetry is ‘Heat Signature’ (Seren Press) and she is editor of ‘Courage and Strength: Stories and Poems by Combat Veterans'.

As we have recently celebrated Burns night, it is a good time to consider the power of poetry, as well as to think about how poetry might speak to power.

As a poet who continues to discover the power of poetry to make things happen in social environments, I welcome the opportunity to act on this statement to further explore how creative writing can allow powerful truths to be spoken and heard.

In projects with the military forces, I have continuously encountered the spontaneity, directness, and sincerity that we associate with Burns, in the work of emerging veteran writers. 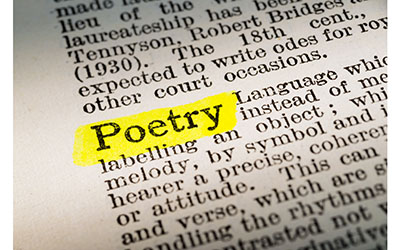 Working initially with Combat Stress UK, the Soldiers, Sailors, Airmen’s Family Association (SSAFA), and subsequently running online mentoring, I have seen some veterans go on to publish their work in both the UK and abroad.

So what is it that occurs when veterans get together for creative practice in writing and what can we gather from the experience?

With Combat Stress, which is the UK’s leading veterans’ mental health charity, I found that previous exposure to art therapy meant that participants in the creative writing workshops were already used to seeing the symbolic meaning of images.

Having worked to create their own paintings which might deal with feelings, they were able to begin creating metaphors; understanding how a poem might indirectly share an experience rather than directly describing it. For example, one participant wrote a poem about a tsunami, which was clearly also about the trauma of combat.

In workshops, after consultation with psychologists, I tend not to use writing exercises which draw out life events. Rather, we approach poetry to uncover several things at once.

A poem can tell one thing but also provide a commentary on that thing. Poetry does this partly through attention to the music of language. Appealing to a similar part of the brain as song, it’s the opposite to the instructional limits of the written word as encountered by veterans in their work, or in their return to civilian life.

Instead, poetry can communicate through repetition and movement. It can use playfulness to convey the real complexities of life.

Poetry can share experiences in ways that suggest the apparent randomness and unfairness of life might be transformed into art, possibly making what is difficult a bit more bearable.

Working with veteran writers for over a decade, I’ve observed that through the writing process, meanings may be released that have not yet surfaced into the conscious mind. Writers sometimes find that their own work offers them clarity on questions they didn’t quite know they were asking. As one veteran said, “It’s as if I am writing to find myself there”.

Metaphor and imagery can call on all the senses and this helps to express experiences that would otherwise remain unvoiced. Also, a sense of control is developed over how much the experiences of the past will continue to affect the present.

Instead of describing the deep involvement of combat - the smells, the sounds, and the pervasive feeling of danger - the veterans with whom I’ve worked express a need to use different ways of thinking. Our creative writing workshops begin with exposure to good writing and participants find that this stimulates their own work. Writing in this kind of way shows that something can be created and improved, and this discovery itself may help to change thinking patterns.

Writing to prompts that I’ve developed over several years of practice, the results with veterans show that creativity can help people facing life-change to find new ways of defining themselves in the world.

Poetry and story can encourage openness, acting as the opposite to jargon and ‘spin’ and instead express lived experience in personal and individual ways. It’s powerful stuff - and the site of real power is that well-crafted work can speak with a universal voice to our shared humanity.

There is a range of free learning about poetry on the Open University’s site OpenLearn, including ‘What is poetry?’ and ‘Approaching poetry’, as well as an interactive ‘Poetry Prescription’ to find the perfect poem to reflect your mood.