When the Blitz came to Clydebank 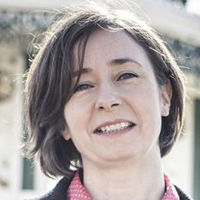 Annika Mombauer is Professor of Modern European History at The Open University.

Her research interests are in the First World War and its diplomatic and military origins.

You may have already seen some of the episodes of the new BBC 2 series ‘Blitz: The Bombs that Changed Britain’. That series would not have been complete without focusing an episode on one of the most devastated towns in Britain: Clydebank near Glasgow. Episode 3 tells the story of what happened when the people of Clydebank found themselves at the heart of the German bombing campaign.

The Blitz came relatively late to Scotland. The first devastating aerial attacks had hit England in September 1940, but the Luftwaffe only focussed its efforts on some of Scotland’s large industrial towns in March 1941. Some Scottish towns were central to Britain's war effort and therefore an obvious target. Unfortunately, towns such as Clydebank were not, as some had believed, beyond the range of German bombers, as its inhabitants would learn on 13 March 1941, when more than 200 Luftwaffe bombers were headed for the town. 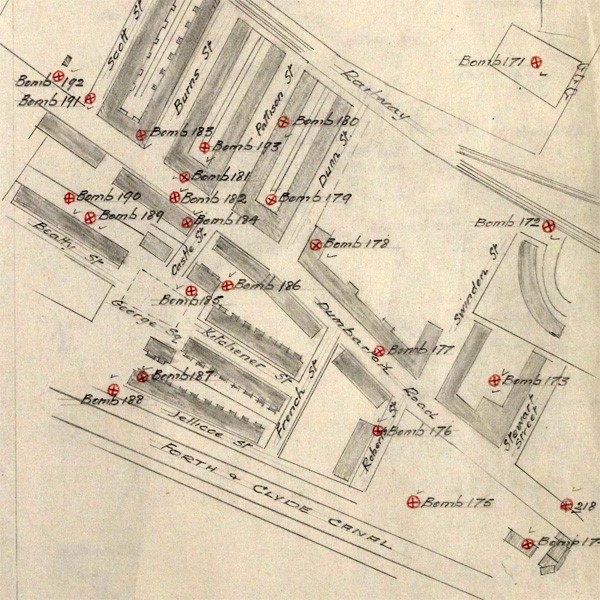 Map of bomb hits on Jellicoe Street (bottom left) and other streets in Dalmuir.

Workers in Clydebank were vital for the war effort, producing battleships, arms and munitions in the town’s huge dockyards and factories in 24-hour shifts, seven days a week. They lived with their families in crowded tenement buildings built for them to provide cheap and convenient housing near the factories.

Clydebank had a long history of industrial conflict, and workers had suffered under terrible working conditions, their families living in poverty in cramped housing. Communism was considered by some a viable alternative to these harsh conditions. But now the country was at war with Germany which had allied itself to the Soviet Union in the Nazi-Soviet Non-Aggression Pact of 1939. So, for some loyal Communist Party members the war was not a just war against fascism but an imperialist war which ought not be fought.

This policy (which led to a lot of communists leaving the party) lasted until the German invasion of the USSR in June 1941. Communist sympathisers were regarded with distrust by their fellow workers and by the Government in London, which had put an Industrial Areas Campaign in place to keep an eye on Communists and to counteract the threat of a potential Communist takeover. When the Blitz came to Clydebank, bombs rained on a workforce in which some 6,000 apprentices were engaged in a strike over their working conditions that had already lasted several days.

When the bombs started falling in the evening of 13 March, many of the ‘Bankie’ families were getting ready for bed, and not everyone was able to seek shelter in nearby air-raid shelters. Many found to their peril that stairwells did not protect from a direct bomb strike. In one instance, 31 people, including 15 members of the Rocks family, died at 78 Jellicoe Street (see map, Bomb 187); the only family member to survive had worked the night shift at the nearby Royal Ordnance Factory.

Many found to their peril that stairwells did not protect from a direct bomb strike. In one instance, 31 people, including 15 members of the Rocks family, died at 78 Jellicoe Street.

On the first night of bombing, the factories were targeted, but in the second, the workers’ houses were the aim of the bombs. Incredibly, of 12,000 homes fewer than ten remained undamaged and 4300 were completely destroyed when some 90 tonnes of high explosives and hundreds of incendiary bombs fell on an area of just two square miles, leaving more than 500 residents dead and many more injured (the official death toll was 528, but some believe that it was much higher). On 17 March, the official figure for homeless people who had been allocated accommodation was 11,350. The German bombing campaign on Clydebank of 13 and 14 March 1941 had resulted in more deaths and destruction than anywhere else in Scotland during the war. The survivors left the devastated towns and sought refuge away from Clydebank – many would never return. Of 50,000 residents, only 2,000 remained after the second night of bombing. 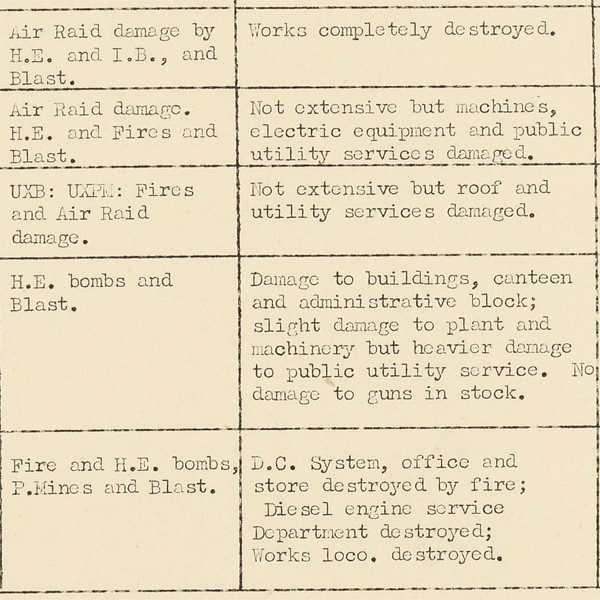 But the factories were needed more than ever, and workers had to be persuaded to return to work. The strike was suspended in the aftermath of the bombing as apprentices were promised that their terms of employment would be reviewed, and their demands were met within days of the bombing. Bankie workers made their way back to town to work in the hastily restored factories, some travelling some 60 miles to arrive in time for their shifts, leaving their families behind. Sleeping in bomb shelters and churches, they would only return to see their families at weekends, adding further stress and trauma to their family lives. The efforts of the workers ensured that, within a few weeks of the bombing of 13 March, industrial output on Clydebank had returned to the levels reached before the bombs had struck. The government was reassured that the threat of a Communist take-over on the Clyde had been averted and that its workers could be trusted to support Britain’s war effort. Soon after, on 22 June 1941, Nazi Germany invaded Soviet Russia and put an end to the 1939 Non-Aggression Pact. Now all workers could reconcile their political beliefs with their loyalty to the country and its war effort and focus on making their contribution towards defeating Nazi Germany by increasing arms and munitions production on the Clyde.

After the war, many of the tenement buildings were restored and today little tells of the horrors experienced in them in March 1941. But every year, the community remembers more than 500 Bankies who were killed in those two night raids.

Episode 3 of 'Blitz: The Bombs That Changed Britain' will air on BBC 2 at 9pm on Thursday 7 December 2017. You can also look at some records and find more information in the National Records of Scotland here.