Gerry Mooney is a Senior Lecturer in Social Policy and Criminology at The Open University.

January 31 is the centenary of Bloody Friday 1919, in which thousands of protesting workers were attacked in Glasgow’s main civic square by police, causing multiple injuries.

Coming barely a year after the Russian Revolution and with insurgency in the air across much of Europe, then Scottish Secretary Robert Munro claimed that Glasgow was in the midst of a “Bolshevist uprising”.

Prime Minister David Lloyd George’s cabinet famously deployed soldiers and tanks to the city, fearing this was a revolutionary moment that could spread around the country.

The idea that this was the point at which the UK came the closest to succumbing to communism is one of numerous enduring misapprehensions about events that day in Scotland’s largest city.

So let me clarify what really happened in George Square, and explain why January 31 1919 remains so vivid for many in the city today. 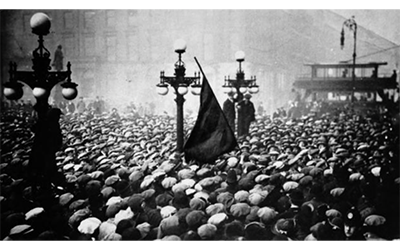 It was only weeks since World War I had ended. In numerous cities around Europe, returning soldiers were taking to the streets to demand working conditions worthy of their wartime sacrifice.

Berlin and Paris saw uprisings, while there were riots in London and Belfast. Then there was Glasgow, which stands out as arguably the most volatile and militant city in the UK in the first few decades of the 20th century.

It was certainly the most proletarian, with a large and combative working class that had been formed by the rapid industrialisation of sectors such as shipbuilding and steel since the mid-1800s.

By the time the war started, arguably Glasgow had more skilled workers than any other British city.

Built on imperial and colonial expansion, the city duly became one of the most important centres of weapons manufacturing for British forces.

Across Clydeside and elsewhere, workers protested poor conditions again and again during the war years, striking in mines, factories and shipyards.

They wanted the working week to be cut from a 54-hour average to 40 hours, and fought attempts by employers to drive down wages and roll back hard-won improvements to conditions.

In parallel, tenants were fighting rent increases by private landlords, culminating in the famous Clydeside rent strike of 1915. This was the beginning of the period of militancy later known as Red Clydeside, which would last until the 1930s.

The Battle of George Square

By 1919, the working classes had newly been given the vote and engineers had agreed a 47-hour week at national level.

But workers in many professions were determined to see a 40-hour week, and a wave of militancy engulfed the city on January 27 in what became known as the Forty Hours Strike.

The UK government in London grew alarmed, and on January 30 agreed to a request from the sheriff of Strathclyde for military backup.

On January 31, more than 70,000 workers took to the streets of Glasgow in what became almost a city-wide unofficial general strike.

At least 20,000 protesters, including women and children, assembled in front of the City Chambers in George Square around noon to hear the Lord Provost read out the government’s response to their demands.

A red flag was raised in the middle of the square, and would become an emblem of the moment.

Groups of police in streets off the square used the disruption to trams as a pretext to dispel the protesters.

After one tram got stuck among the crowds, police started attacking with truncheons. Soon there was a full-scale riot, and some protesters commandeered a lorry full of lemonade bottles to repel the police. 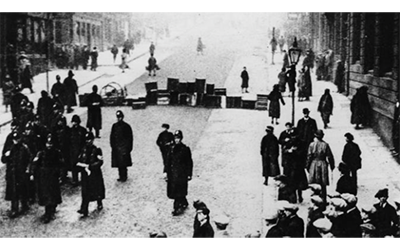 The violence left 34 workers and 19 police officers injured. In the aftermath, the square was a mess of broken bottles, wooden sticks and steel fence posts, with mud everywhere from all the grass being torn up.

Contrary to popular belief, there was no military presence day. Troops did not start arriving until the evening, and no tanks rolled onto the streets until the following Monday.

Soldiers remained visible across the centre of the city for the next couple of weeks, guarding tram depots, electricity stations and bridges.

There was a heavy military presence in George Square, including machine guns mounted on turrets.

The British government, employers, local politicians and some trade union leaders all condemned the unrest as “political” and therefore illegitimate.

This seemed to be confirmed by the red flag and claims by Gallacher that this was a revolutionary moment.

Yet while many continue to play up the revolutionary aspect today, there is no evidence it was anything more than a legitimate demonstration.

Nor was this a Scottish nationalist protest – another common misapprehension.

This is partly sustained by the myth that the British government had to send English regiments to Glasgow as it could not trust Scottish soldiers to intervene against fellow workers; yet both English and Scottish regiments were deployed.

And while there were demands for a Scottish republic at that time, they were marginal compared to the present day.

More importantly, the events were a major milestone for the worker movement.

The strike was called off in February 1919 after shipbuilders and engineers were guaranteed a 47-hour working week.

An ensuing belief in the power of mass protest helped Scotland to elect 29 Labour MPs in 1922, ahead of Labour leader Ramsay Macdonald becoming prime minister the following year.

The January 1919 protest also became a template for rank and file unofficial strike action, and helped to establish Glasgow’s reputation as a hotbed of worker militancy.

This doesn’t always sit comfortably with Glasgow’s modern view of itself as a post-industrial “knowledge city”, but worker militancy is an essential part of its fabric to the present day.

There is still disquiet nowadays about the working week – both in Glasgow and far beyond. 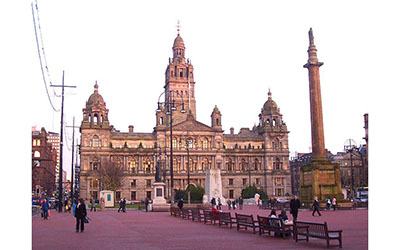 The UK has among the longest working hours in Europe: more than 42 on average in 2017, around two hours more than the EU as a whole.

This is well beyond the 35 hours laid down in law, at a time of growing demands for a four-day week of 28 hours.

George Square 1919 is both a reminder of how things used to be and an example of how worker protest can slowly achieve progress over time.

It is important to be clear about what did and did not happen that day in Glasgow 100 years ago, while reminding ourselves that the battle for better working conditions is not merely history but something that very much continues today.

This article was originally published by The Conversation.